With more than three decades in the sport as a mechanic, it would be impossible to imagine how many wheels he has built, bikes he has serviced or kilometers he has driven in the team truck. But it is safe to say that Dirk Tyteca is one of the most experienced wrenches in the peloton today. And as a Belgian working for the Deceuninck-Quick Step team, the spring classics always hold a special place in his heart. Tyteca looks back on his years in the sport, the riders he has worked closest with and the challenges facing mechanics as they prepare for the world’s greatest classics.

Dirk, I have seen you at the races for not just years, but for decades. How long have you been a professional mechanic? Oh, it is 32 years now.

How did you get into wrenching? Were you a rider like many team mechanics or did you have a different path? Yes, I was a pretty good amateur and should have turned professional, but I had a big accident when a tractor rode over me in 1986 and that was pretty much the end of my career. I was actually scheduled to turn pro on a small Belgian team in May, but I had my accident in February and everything was over. I had already been working in a bike shop and then I started going to some races to help guys out and then finally teams asked me to go work with them. The first team was TeVe-Blad, a small Belgian team. But things happened very quickly after that. Then I got a job with Tulip Computers, my first big team, before I went to Telekom. I was there for 10 years, then I was at Lotto for three years and have been here for nine years now.

Well, that definitely makes you one of the most experienced mechanics in the business. And as a Belgian I can only imagine that the spring classics are a huge part of the year for you. What are some of the greatest challenges as a mechanic in the classics? Well, the most challenging is Paris–Roubaix. You have to build special bikes, special wheels. We work very closely with Specialized to build the perfect frame for Roubaix and it really works well. But a lot of time goes into it. And it is challenging for the riders as well as us because they have very little time to set up rides with the bikes before the race. It’s very hectic and everything comes together in the last week. But all of the classics are tough. We prepare for months for the Flemish classics. For a race like Flanders for example, we will start in February. We might do 10 recons of the roads before the race. We are taking different riders out at different times, going over every detail. There are just so many small details. Probably the most important thing that we try to dial in with each rider is the tire pressure. It’s ever changing. It depends on each rider, on the road conditions, the weather. It’s crazy but it makes such a difference!

How many bikes does each rider have in the classics? Each rider has three bikes. They have their first race bike, then the spare bike that is on the team car, and then a third bike that is on another car that is cutting the race off at different points. And if the rider’s bike has a mechanical, we give them the spare, then we connect with the third car and put that bike on the race car and the mechanic in the third car will repair the bike. And at Roubaix we have five bikes per rider. There are bikes everywhere.

Of all of the champions have you have worked with who have you work with the closest? Oh, that would be Erik Zabel. We worked together for maybe 13 years, and when you work with someone that long you become friends. I knew his son Rick when he was only two years old and he is 26 now! And then I have a very close relationship with Julian Alaphilippe today. As with Zabel, I have been working with him since he turned professional on the team. And they are a bit similar when it comes to equipment. Both are very meticulous when it comes to setting up their bikes at the beginning of the season, but once we get them dialed in, they just ride!

There is no middle ground between good and bad when it comes to setting up a bike. It has to be good. But once it is set up the way he likes, Julian doesn’t change anything. He doesn’t want to be changing things up during the season. And I think he is right. Your body just gets so used to your saddle, your handlebar, whatever, you name it. If you change your seat position in your car, you are going to feel it. And the same thing goes with a bike. So riders at that level should not be changing things up in the middle of the season. 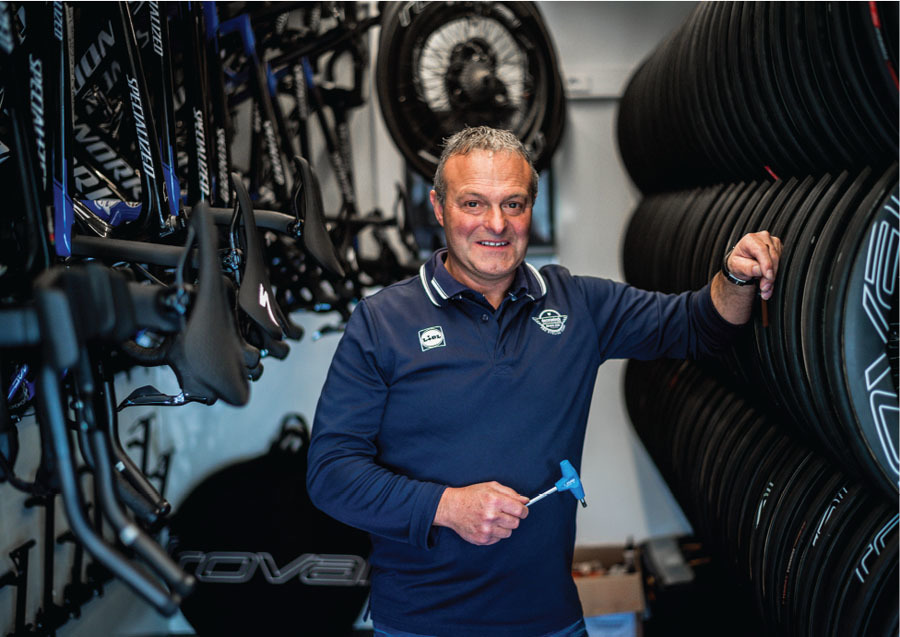 Alaphilippe is riding the Tour of Flanders for the first time this year. Is that going to require special preparation? Well, Julian is just such a complete rider that on a physical level I don’t think there will be any problem. No, his biggest handicap is that he does not know the roads. But we will be working on that and he is going to spend several days on the Kwaremont, really studying the different climbs. He’s going to spend a week in all, just on recon for Flanders well before the race. And then he is on the right team. We know Flanders so well and there are guys on the team like Iljo Keisse who have so much experience and really want to share it. He can act as the eyes for Alaphilippe in the race. So I think Julian will be in good hands.

What was your greatest day as a mechanic in a race? Oh, whew, there have been so many! Hmm. Well I would have to say that day in the Pyrénées in the Tour de France two years ago [stage 16] when Philippe Gilbert crashed so hard and then Julian came back and won the stage at the end. It was just so emotional because I was behind the crash with Philippe and then I was in the car behind Julian when he won the stage into Luchon. It was actually my worst and best day all combined. But on a sheer emotional level, it was definitely the one that had the most.

From issue 71 • Words/images by James Startt