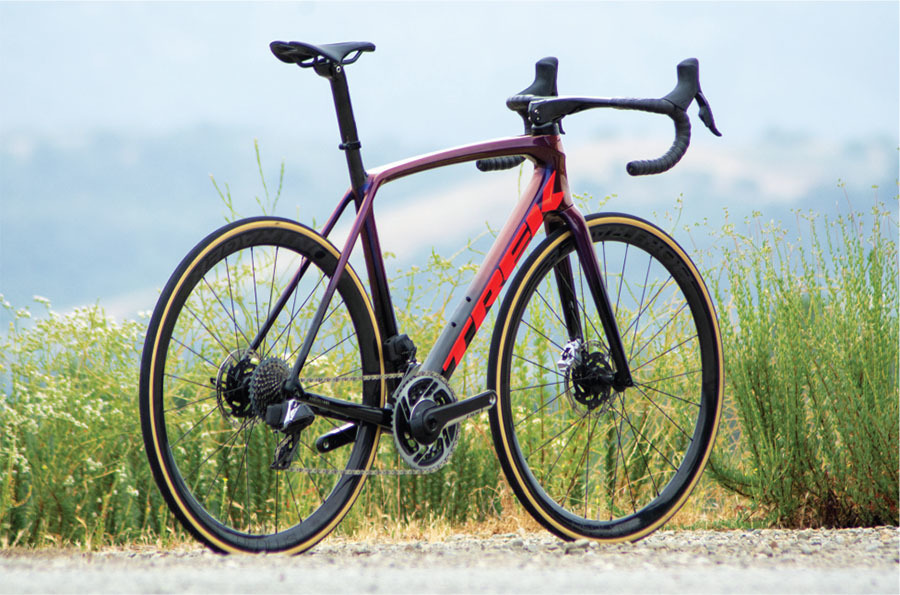 As you might be aware, Trek already has an aero road bike, the Madone. The question then was how to make aero work for riding uphill, when wind gusts can be as fast as or faster than your ride speed. Trek focused on the bike’s front end and optimized the tube shapes for the low-speed aerodynamics experienced while climbing. All the cables are internal now. And the cockpit, one of the first parts that meets the wind, has been upgraded to the new Aeolus RSL VR integrated bar-stem combo. It’s more aero and routes cables underneath the stem into the frame for easy adjustability.

Notably, this bike bucks the trend of dropped seatstays. Trek says there are aero benefits from dropping the stays, but it is a less structurally efficient choice, necessitating more weight. Having a tangible Alpe d’Huez benchmark, rather than just chasing arbitrary weight or aero goals, helped the team stay focused and make those design decisions. In the end, the new frame has ended up faster across all yaw angles versus the previous Émonda and still weighs sub-700 grams. And crucially, it is 15 seconds faster up Alpe d’Huez.

Fifteen seconds saved over one 13.8-kilometer HC climb might seem paltry to some, but over the course of all the climbs in a grand tour that could be minutes saved. Not to mention the extra aero benefit on the flats leading up to the climbs.

The element that has allowed Trek to keep weight down to a claimed 698 grams while introducing aero shapes that are less structurally efficient is OCLV 800 carbon. Trek says this material is 30-percent stronger than its previous OCLV carbon laminates, yet just as stiff, meaning the new aero shapes can be made with less material. If the previous Émonda had been made with this new material, Trek estimates it would weigh somewhere in the low-600-gram region—but then it wouldn’t have climbed as fast as this latest aero design.

Trek also worked with its professional riders on the Trek-Segafredo team to develop a geometry that falls in between the aggressive H1 geometry and relaxed H2 geometry. It’s called, fittingly enough, H1.5 and Trek says it puts a rider in an optimal aero position that is comfortable to ride in all day.

While we enjoy a swift aero bike, we have always had a soft spot for the low weight and sweet handling of a good climbing bike. The new Émonda brings a touch of the former without losing sight of the qualities necessary for the latter. On the steepest parts of climbs where normally we’re just trying to hold a straight line, this bike offers another gear, flying away as you rise out of the saddle. It’s the perfect weapon for launching attack after attack.

Once you get over the climb, those trailing you will have a hard time staying in your slipstream on the descent, thanks to the Émonda’s slippery tube shapes and the Aeolus RSL 37 wheels. A quick note on these 37mm-deep wheels: They are phenomenally fast. They feel as fast as 50mm wheels, without any crosswind issues. Plus, their weight, a bit over 1,300 grams, is the perfect complement to a climbing bike, allowing rapid acceleration uphill.

And while this bike is optimized for climbing aerodynamics, it still motors away on the flats. Trek estimates it saves a minute per hour at 350 watts on flat terrain, and we have no problem believing that. After seeing what we can do with the new Émonda, we’re excited to see what the pros can do once racing starts again.