The Home Of Cherubim From Issue 81 • Words by Tomohiro Okusa (Translation by mot.tiff); Images by ROB Walbers Even by train, it’s more than half an hour from Tokyo hubs such as Shibuya or Shinjuku. Cherubim is located in a residential district of Machida, a city to the west of central Tokyo. I take a cab to the workshop from the nearest train station. “I’m going to Cherubim, the bicycle maker. You know it?” I tell the driver. “Ah, the famous place?” comes the response. And it’s not just Machida taxi drivers. Cherubim is a name known by bicycle enthusiasts and craftsmen around the world.

Nowadays, Cherubim is run by Shinichi Konno. Night and day, he’s hard at work in his combined bicycle store and workshop. His father, Hitoshi, also a bicycle builder, is the founder of Cherubim. Hitoshi, by the way, is the oldest of six brothers. Two others also founded bicycle brands: middle brother Yoshi started 3Rensho and youngest brother Shin established Miyuki. In the 1980s and early ’90s, people talked about “the three Konno brothers of the competitive cycling world.” 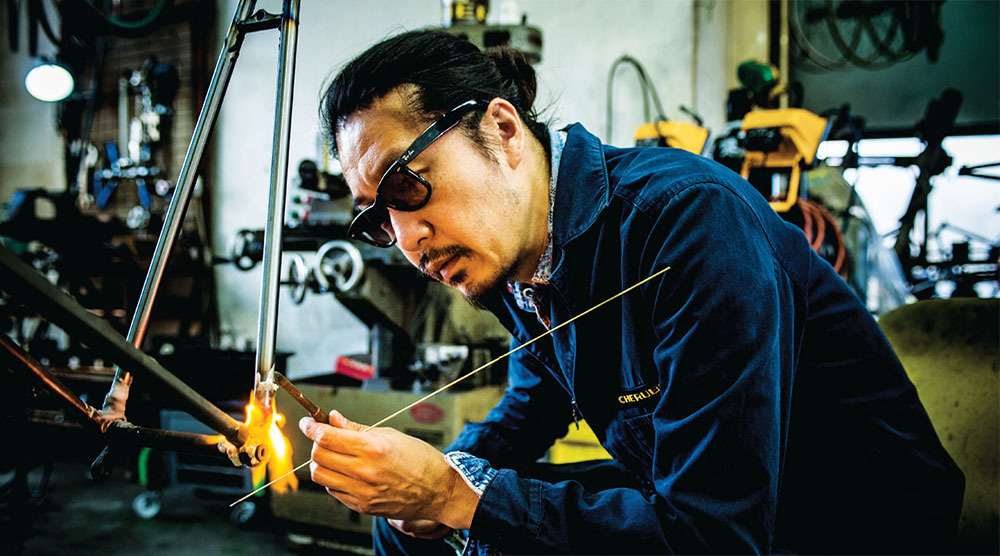 Growing up in this environment, young Shinichi Konno’s toys were, of course, bicycles and tools—and his playground was the workshop. He recalls, “Until early elementary school, playing in the workshop was more fun than riding bikes. I would fiddle with the gears and get really proud when I fixed a flat. Before long, I was riding and entering races.”

Being around bicycles from childhood, and watching his father work, he found himself thinking, “Yeah, I’ll probably follow in his footsteps.” He started helping out in the workshop when he was around 20 years old.

“Dad wasn’t too hardheaded,” Konno says. “He was actually pretty flexible. He wasn’t like, ‘You gotta feel it in your back’or ‘Just do what I do.’ He taught me everything step by step. Even so, it’s not as if I could do things after a year or two. It was just training.”

His father taught him the fine points of the craft as they arose. One important thing he learned was his father’s approach to the job. “Dad did everything himself, electrical work, fixing the frame of a house, taking the toilet out to fix it. I was amazed you could do those things yourself, including making a bicycle. When Dad started out, he didn’t have anyone to teach him, or tools, or a jig. But, there he was, building bikes. He found his own way to do it. That way of thinking is the main thing I’ve gotten from him.”

Konno developed a self-reliance, experimenting and figuring things out for himself. “If you can latch on to that, you can deal with anything. Dad was meticulous. And he gave me advice, but it was up to me to decide.”

This is why his workshop today is constantly evolving with new tools and materials. “You can’t just keep doing things the same way. If there’s some new material available, I try it. If there’s a good technique, I try it out.” As Konno notes, if his father Hitoshi was building frames in the workshop as it is today, he probably couldn’t make a thing. Konno doesn’t stick to conventions. 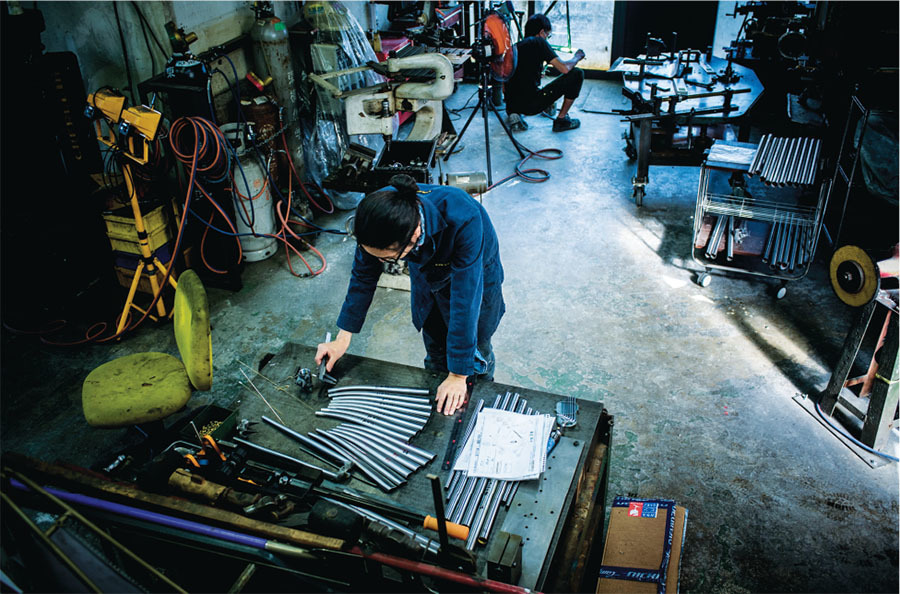 When Konno first started working, the prospects for the bicycle industry were less than bright. The chromoly steel then commonly used for bike frames was hard to come by. People around the world were beginning to use new materials, including aluminum and titanium. Even brands like Cherubim weren’t making much in the way of racing frames. It was a time of little activity. Given the way things were going, Cherubim even tried its hand at consumer sports bikes for a while. And in his father’s day there was no storefront. Frames were built in the workshop and then sent off to the customer. But Konno was intent on selling finished bicycles, so he acquired a retail space. As it began offering products like a line of high-performance bike frames, the Cherubim brand gradually transitioned from his father’s vision to the son’s.

“The price range was nearly three-fold,” Konno says. “And we gradually acknowledged that our target market had likely changed. Eventually, we were steadily building custom frames for people who wanted chromoly bikes.”

As the now second-generation brand underwent fundamental changes, there were many people who preferred the way things were before. The only thing he could turn to in such times was his own craftsmanship. “The challenge for a second-generation company is figuring out what you are, where you fit in. Even after gaining some confidence, there are still comparisons to my father. It’s hard to establish your own identity. At times like that, the only thing you have to stand on is the bikes that you’re building. Making things with your own hands that you’re confident in. That’s everything.”

Unconditional confidence through craftsmanship. It came from building frames for keirin track racing, which was developed in Japan. Hand-built frames shape the capabilities of its competitors. A tiny discrepancy could render a bike unusable. The degree of precision in Japanese manufacturing is worthy of pride. But Konno says meeting specifications is nothing special. It is the product of the combined precision sensibilities of bicycle builders and pro cyclists.

“The quest for precision in making Japanese racing bikes has a cutthroat side to it,” he says. “In saying that, you first have to understand how amazing these competitive cyclists are. They’re very discerning. Even with the same frame design, if there’s a one-millimeter discrepancy, they’ll know it as soon as they ride it. They can even tell if a bike was made in summer or winter. They’re riding for their lives. We can’t be half-hearted about meeting their needs.”

The best keirin cyclists stand to earn prize money on par with Major League Baseball players. And they aren’t tied to endorsement deals for the bicycles they ride. Which means if they’re dissatisfied with a frame they ordered from Cherubim, they can easily ride another brand. And if they don’t take their equipment seriously, they can’t achieve the results they want. In the racing world, where victory is a clear measure of ability, the cyclists and the builders have raised the bars for one another.

Konno is particular about a number of points. When he receives a shipment of tubes, he uses ultrasound to measure the tube thicknesses for any variations. He adjusts them little by little, making them thinner or thicker. And, essential to a frame, there’s the welding. He says the stiffness of a finished frame varies according to the welding gas used, propane or acetylene, and its additives. So, he uses the appropriate blowtorch as requested by the cyclist.

“It feels like the cyclist is building it with me. I’m working with lots of people, trying different things out. They can be quite demanding, so of course that raises the bar for us, too. When we make a good frame, they say things like ‘just straddling it propels you forward’ or ‘it’s like riding on ice.’ But if the same frame isn’t well made, they won’t even use it in a race.”

There are as many as 30 companies building competitive racing frames in Japan, most of them exclusively for keirin. Cherubim is unusual in that it also builds concept bikes and bikes for the general public. Which means you get that much technical expertise in a consumer bicycle.

The time consumed by a job is surely shown by people going “Let’s get this done!” in the final stages.

Cherubim gained international attention at the North American Handmade Bicycle Show for its Airline and Hummingbird concept models. These beautiful, streamlined designs capture the essence of proud Japanese craftsmanship. “I remember how thrilled I was going to motor shows and things as a kid,” Konno says. “People see our concept bikes and say, ‘You wouldn’t actually ride something like that.’ I don’t mind. If kids see it and get a kick out of it, that’s enough for me.”

Konno gets his inspiration for bicycle designs from all around us, even if not always from exotic themes. This is the source of our human sense of beauty. “There’s a lot to learn from nature—like how the trunk and branches of a tree can withstand heavy rains and winds. That’s a resilient structure. As humans, we see that and sense the beauty in it. It’s not about setting out to create something beautiful. But by designing something that’s logical and efficient, it naturally becomes beautiful. It’s the same for bicycle designs. When you’re trying to get things right, the weight, the durability, the feel when riding, it naturally becomes beautiful.”

Through two centuries, the fundamental design of the bicycle hasn’t changed much. But this shape wasn’t the invention of some solitary genius. It embodies the skills and wisdom of many. That’s why bicycles are efficient; there’s nothing unintentional about the design.

Despite the international brand recognition, Konno says he plans to remain a hands-on craftsman. Increasing the precision with which orders are met, rather than inventing something from scratch. Back in the day, a local bicycle shop was a place that would adjust your bike to fit you better. With bicycles, that fit is essential. It’s the same with wearing shoes that don’t fit, no matter how fancy they are. Still, there’s not one correct answer to meeting the needs of individuals, especially demanding cyclists. But with each interaction, the precision and the quality improve. This is Cherubim’s and Konno’s endless journey.