Pinarello Dogma F12: The Formula 1 of Bikes From Issue 90 You may know that Ferrari F1 driver Charles Leclerc battled Lewis Hamilton for over an hour at an average speed of 150 mph to win at Monza this year; and he’s not the No. 1 driver on Ferrari. Sebastien Vettel has that role. Leclerc is 21 years old and beat the best in the world. You may know that his godfather Jules Bianchi, also a Ferrari driver, died in a crash in 2015 and the young Leclerc vowed then to honor him by earning a spot driving for Ferrari—and he was given that rare chance this year.

You do know, of course, that four-time Tour de France winner Chris Froome suffered a potentially career-ending crash in 2019 that kept him out of the Tour, giving the lead role at Team INEOS to 2018 winner Geraint Thomas, which in the same instant pushed a young racer from Colombia, Egan Bernal, onto the start list in Belgium. 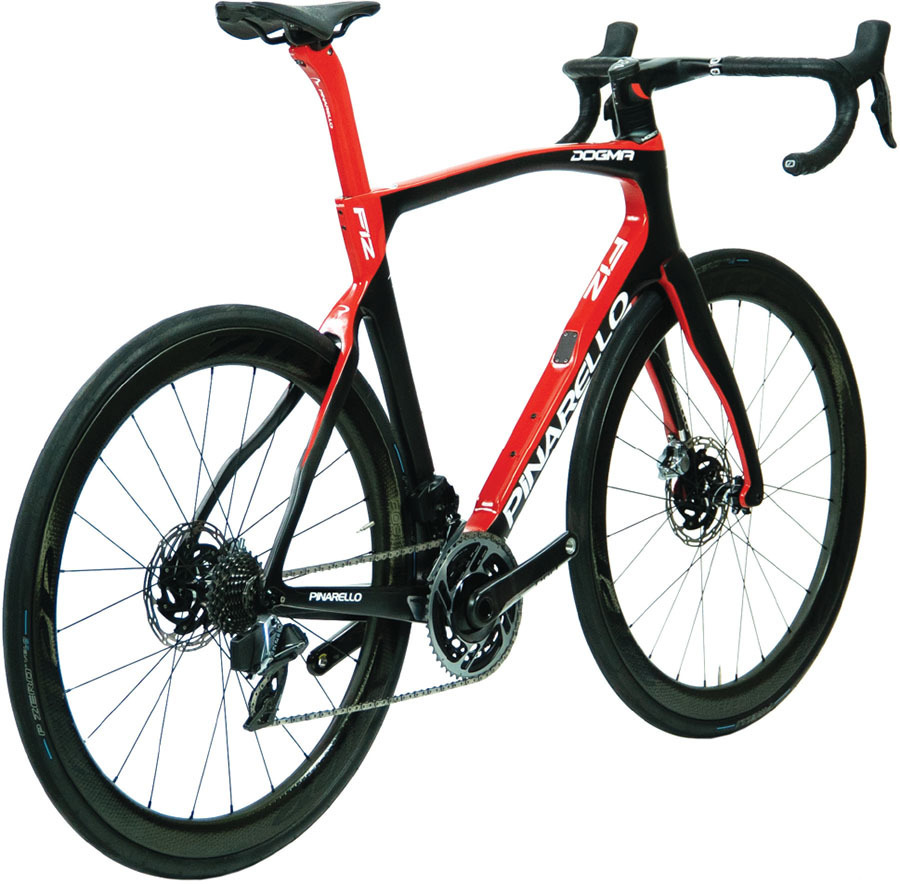 Can you see where we are going? You may or may not know that Bernal traveled to Belgium with his father (if you don’t follow him on Strava, you should) and that at home in Colombia his father accompanies Egan on a scooter while he puts in insane training rides in the mountains of that beautiful country. Colombians began racing the Tour de France in 1984, but they have never stood on the top step of the podium until 2019. Bernal was riding a Pinarello Dogma F12 as he rode across and around the country of France. You can buy his bike and you can ride those roads. You may not have his heart, lungs, history or legs, but you can ride his bike and you can ride on those same climbs.

The F12 just looks fast and it reminds us of an F1 car. We started reviewing it before flying off to the Tour and we liked it on the very first ride. We did have some questions though. Because it is so performance-based, we didn’t jump on it and instantly declare it the greatest bike we’ve ever ridden. It demands respect and time. Thankfully, our job is to ride bikes and so we put in the time and the miles on the Pinarello F12 so we could give it an honest and objective review.

Our 58cm F12 is a race bike, plain and simple. It’s designed to win races and go fast. Speed and handling are the priority and these attributes are designed-in and executed perfectly. The clean look of the F12 is helped by zero cables being exposed and the bike boasts reduced aero drag—compared with the F10, it has 16-percent less drag on the fork, 40-percent reduction in torsion under braking and the rear end is 10-percent stiffer. The style points overflow with the asymmetrical design and the very Italian shapes and angles; and for the pragmatists Pinarello offers 13 different frame sizes and 16 different bar sizes. You can fine-tune the F12 into your ultimate race machine. This bike is very F1, right down to the Pirelli tires.

It’s hard to describe the first few rides on the F12. The bike did everything right, but we didn’t notice anything otherworldly until we looked at our times on regular Strava segments. They were all faster. So we kept riding and continued to push the handling and speed characteristics of the F12 and, in doing so, began to fall in love with this bike. It isn’t very often where we feel humbled by a bike design or build. On the F12, we did. The bike is built for intensity and racecourses and, although humbled, we were also pushed to go a little faster, a little farther and brake a little later into corners, knowing that the F12 would not only handle the extra input but would also own it. The Pinarello F12 climbs exceptionally well, but you will notice the perfection of the design most on descents, in corners and in situations where you ask the bike to do more—and it answers in the affirmative every single time.

We have a regular out-and-back that goes from Ojai to Ventura for 16 mostly downhill miles, then turns right and heads along the Pacific coast to Rincon. The headwinds are always strong on that 10-mile section and we found the F12 to be the fastest bike we have ever taken on that loop. The bar/stem combo and hand-position options came in handy when the wind was howling at us and we continued to turn pedals into the wind. Then things got really fun on the way back with the wind at our backs.

Truth be told, we also feel a certain racing legacy whenever we ride a Pinarello and especially with the F12. From Alexi Grewal’s Olympic victory in 1984, to Pedro Delgado at the Tour in 1988, to Miguel Induráin’s 1991–95 win streak … to Zabel, Ullrich, Wiggins, Froome, Thomas … and now Egan Bernal. You are in winning company on a Pinarello road frame and the F12 is the culmination of all those designs and testing.

The F12 has to be ridden to be understood and we hope to get as many rides on this bike as possible before we return it to the Pinarello demo fleet. Maybe you could do us a favor and don’t remind them we have it at the Peloton service course!