More Than Just An Aero Bike: Parlee RZ7 From Issue 93 Parlee is best known for its custom carbon frames built in Massachusetts, but after spending a few weeks on this RZ7, it may soon become known for a different version of an aero bike that bears the venerable Parlee name.

Before founding his namesake bicycle company two decades ago, Bob Parlee spent his time developing America’s Cup racing sailboats. The RZ7 takes the low-speed airfoil shapes he used to develop those cutting-edge yachts and updates them into the new Recurve airfoil used in the RZ7. The new design not only improves drag reduction but also optimally balances lateral and vertical stiffness of tubes to maintain a pleasant ride quality. Compared to Parlee’s own Altum road bike, the RZ7’s bottom-bracket stiffness has been increased by a claimed 7 percent.

Aerodynamic details are plentiful on this bike, like fully internal cable routing that has been optimized for electronic groupsets. (Though for this full SRAM Red eTap AXS build— with a 46/33 crank and a 10–33 cassette—there are only brake cables to route.) Parlee has also developed its own stem, which further hides cables, and mates it to an in-house carbon bar. Moving back to the saddle, the Parlee-designed components continue with a seat post featuring a reversible rail-clamp system, allowing 0mm or 25mm of offset in the same post. 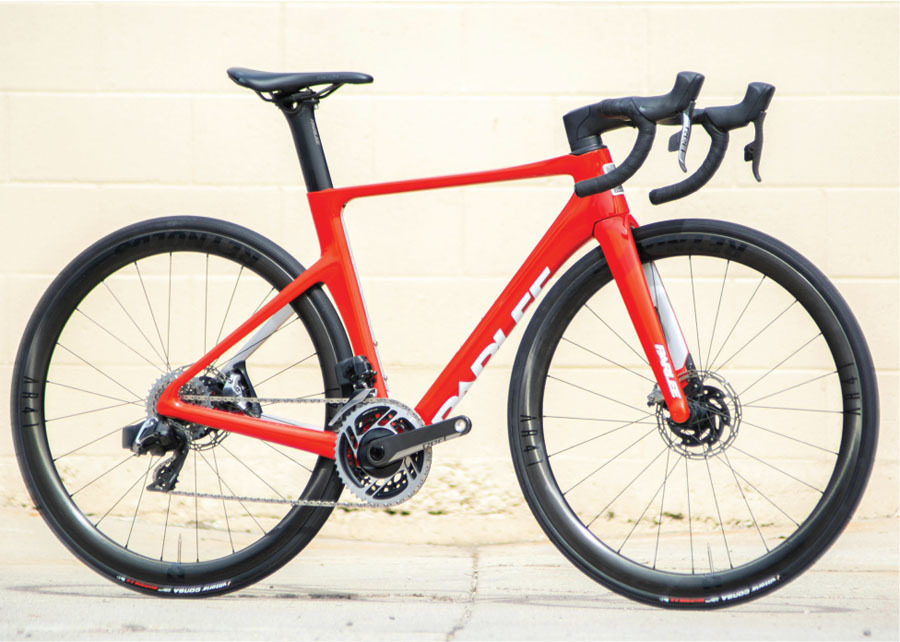 Parlee has also played around with the through-axles, reducing the length of the rear axle by a centimeter and the front by 6mm, and integrating the axle heads into the frame itself for a sleeker look. This all means weight savings and an additional aerodynamic benefit. And in what is perhaps the most eye-catching of all the aerodynamic features on this bike, and definitely the most unique, Parlee borrows the discbrake-covering SpeedShields from its TTiR triathlon bike. Every watt counts.

With room for 32mm tires, the RZ7 more than meets the high-volume rubber demands of the modern road rider, and even begins to blur the lines of where we thought we could take an aero bike. Parlee takes advantage of that clearance in this build, including 28mm Vittoria Corsa tires, a favorite of ours, mounted to Reynolds AR41db wheels. To fit in all that rubber, Parlee extends the chainstay length to 415mm, a tad longer than other aero road bikes. And, at 75mm, the bottombracket drop is lower than most aero road bikes too.

Even though the RZ7 doesn’t get the same individualized attention as Parlee’s custom carbon frames, it still benefits from the company’s decades of carbon knowhow, including a high-performance blend of precisely laid-up carbon. This helps keep the weight down: A medium frame tips the scales at just 870 grams. Built up, our size small bike weighed in at 17.49 pounds (7.95 kilograms) without pedals or cages.

After many miles on the RZ7, if we had to say just one thing about it, the hallmark feature that comes to mind is comfort. It’s not comfortable just for an aero bike, it’s comfortable, period. We could ride it all day and not mind. We’re fans of the racecar-red paint too—by our back-of-the-napkin calculations, having nice-looking paint saves at least five watts.

It’s hard to say definitively where the RZ7 fits into the grand pantheon of aero bikes in terms of raw speed. The RZ7 is plenty fast as one would expect from an aero bike, but it shines in areas you wouldn’t expect at first glance. The bike surprised all our test crew in the handling department. But it shines with its handling. Accelerating up to speed quickly, the RZ7 delivers a laterally stiff ride that snaps to action as soon as you stomp on the pedals or stand out of the saddle. And it accomplishes this even with slightly longer chainstays, which we thought might dull its responsiveness. That lateral stiffness, combined with its reasonably light weight, has also made the RZ7 surprisingly adept at climbing.

With razor-sharp handling, the RZ7 is geared toward those who prefer a racier feel. Just point and shoot and you’ll end up exactly where you want to be. If you are looking for a bike with precise handling and you like to push things to the limit, you will have a willing companion in the RZ7.