When 3T introduced the Exploro, it was a groundbreaking bike, one based on the idea that aerodynamics can play as much of a role off-road as on. And, boy, could it ride! Though a gravel bike first and foremost, it could easily be a quiver killer for the right rider. It quickly became a favorite of ours—one of those bikes that’s hard to send back.

So, naturally, we became giddy when we discovered that 3T had developed a new Exploro that ups the ante on aerodynamics and tire volume, two of the features that the original Exploro pushed the boundaries on. Called the Exploro RaceMax, the new bike is not so much an update (the OG Exploro still happily holds a place in the 3T lineup) as a completely new platform.

After studying the needs and habits of gravel riders, 3T categorized them into two broad categories: racers who want speed and riders who want maximum tire volume for control and comfort. Depending on how it’s built up, the Exploro RaceMax is really two different bikes—a speedy gravel machine for 35mm-to-42mm tires, or a volume addict’s dream clearing rubber up to 650×61mm.

The starting point for designing this bike was a bit nontraditional. Instead of focusing on new aero-tube shapes or a different geometry, 3T began with the tires. As most of us are likely aware, tire width is not constant. One brand’s 40mm might measure 38mm, while another’s measures 42mm. Meanwhile, tire pressure and rim width also affect actual tire size. To work with this variability, 3T developed two new metrics, RAM (tire radius as measured) and WAM (tire width as measured), and began measuring a lot of tires on different rim widths. Soon, 3T determined a common size range of the most popular tires and optimized the bike around that, creating a down tube and seat tube that sit closely to the wheels for aerodynamics while still providing ample tire clearance. 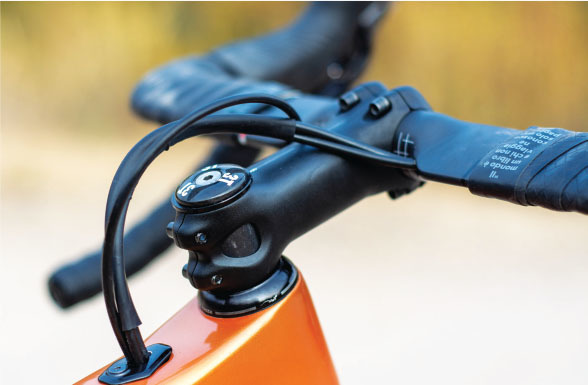 The practical design considerations did not stop at tires. We all ride with water bottles, so 3T designed a down tube wide enough to shield a bottle from the wind, a massive 75mm across, which tapers to 46mm near the head tube for clean airflow between the tire and down tube. This isn’t a bike that’s optimized for idealized wind-tunnel conditions. It’s made for the real world and tested for realistic speeds of 20 mph. The engineers even wind-tunnel tested the bike with mud on the frame. Now that’s dedication!

In the pursuit of aero efficiency, 3T also included a narrow head tube, but to give the bike a stiffer ride, squeezed in a large 1⅛- to 1½-inch tapered steerer tube. And thanks to a minimal fork crown, the fork has a road-bike-like, crown-toaxle length of 370mm, helping the bike maintain geometry and handling more similar to a road bike.

The RaceMax is available in either a “Race” build (with smaller tires) or a “Max” build (with 650b wheels and maximum tire volume). Our test build, a size 54 with GRX mechanical 2×, falls into the former category, outfitted with 35mm Pirelli Cinturato Gravel H tires (which measure out a bit wider). It featured a couple of key upgrades, including 3T’s own Discus 45 × 32 LTD wheels, which have a 25mm internal rim width, and the 3T Aeroghiaia handlebar, which is aero on the tops but has aggressive flare in the drops for control. With those upgrades, the bike costs $5,948 and weighs 19.27 pounds (8.76 kilograms).

The original 3T Exploro was one of those bikes on which we just felt immediately at home. The fit, the handling, the ride—it all felt similar to riding a road bike. And having ridden road for so long, that’s a fit that we often have the most fun on. Well, the 3T Exploro RaceMax is cut from the same cloth. Mounting it for the first time we again had that immediate sense of feeling at home. On flat tarmac you can assume an aero, yet still comfortable, position and pick up speed with ease. It’s not until going uphill on road that you’re reminded this is a gravel bike with larger tires. In fact, the bike feels so much like a fast bike that the most critical thing we can say is that it’s a bit heavy…for a road bike. But for an aero gravel bike with carbon wheels it’s impressively light.

Off-road, the experience of ripping across whatever terrain you encounter continues. And notably, the RaceMax is very capable while cornering, something that sets it apart from many gravel bikes that are focused on absolute stability and comfort over long-haul gravel events. If you spend as much time on-road as off, the Exploro’s handling provides an enjoyable ride. It’s a bike that we would have no problems with throwing 30mm slicks on and taking out for a group ride or hitting the trails.