The Campagnolo Van: Italy And America From Issue 98 | Words by Brett Horton w/images from Horton Collection For anyone who loved racing in the 1970s and ’80s, Campagnolo was king. Everything about Campy exuded class, elegance and victory. With minimal competition at the time, the iconic Italian company ruled the roads. The halcyon days of French components were clearly in the rearview mirror and Japanese companies SunTour and Shimano were not yet entrenched on the racing side of the cycling ledger. Simply stated, it was a glorious time to be a fan of all things Italian.

A growing part of the legend was the blue Campy van, a fitted-out 1972 Fiat 238 that was a fixture at races all over the continent. From the stories I have heard, it was a fan-favorite magnet that countless up-and-coming riders in the mid-1970s lined up with to be photographed. 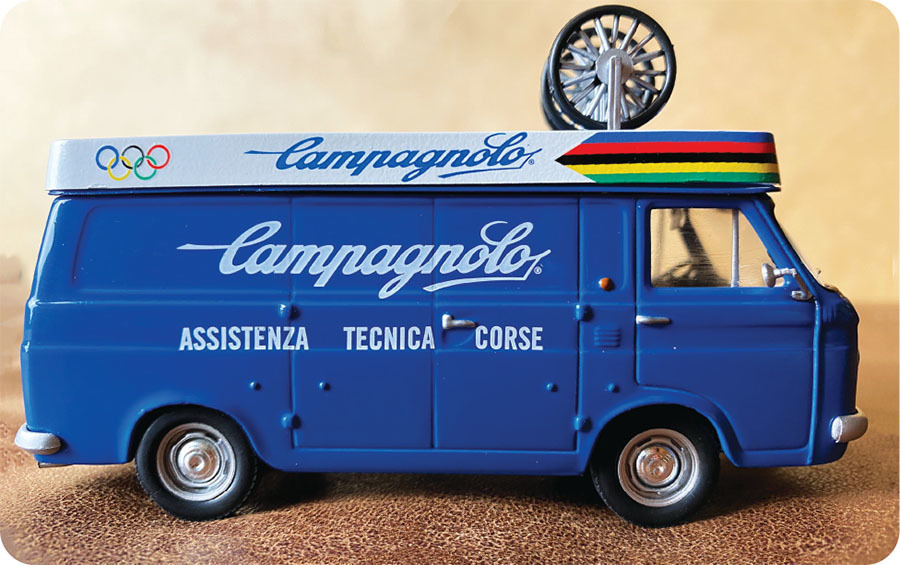 A few years later, the American version appeared courtesy of the Campagnolo distributor. What I most remember about the van was the world championship rainbow stripes down the side and a translucent bubble dome on top. Even as a teenager I knew that if the Campy van was at a race, you were at a race that mattered. 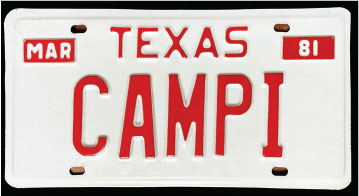 A while back, a metal die-cast miniature of the Italian Campy van was produced. It is quite a nice homage to the original one that ruled the road. I have mine sitting on my office desk. I often catch myself mindlessly rolling the car around on the desk during conference calls. It is a sort-of fidget spinner for an aging fanboy.

Two years ago, at the estate auction for the late cycling importer and connoisseur of life, Othon Ochsner, I was elated to see that the pair of license plates from the U.S. Campy van had not only survived all these years but also were up for bid. I was thrilled to get the set. Every time I see those plates, I think about my pal Othon and the great meals and stories we shared.

It’s funny how things as simple as a toy car and a pair of license plates can transport one away to a rose-colored time when all was right in the world, “Breaking Away” was on the big screen and a company from the magical city of Vicenza, Italy, ruled the day. [And now that a Campagnolo-equipped bike has won the 2020 Tour de France, maybe the glory days are back.]