Italy’s iconic Passo di Stelvio was a legendary battleground long before its first inclusion in the Giro d’Italia in 1953, when Fausto Coppi was first over the summit on a solo break that displaced Hugo Koblet from the pink jersey. Maybe it was fitting that an Italian beat a Swiss, as these countries are two of the three which share a border on this lofty pass.

But it was the third country, Austria, which got the ball rolling on what many cyclists consider the premier ascent in the Alps. In the early 19th century, the Austrian Empire controlled the land surrounding the Stelvio. The rulers needed a route to get from the north to their southern holdings in Lombardy and Venetia, and from 1820 to 1825 the road was built up and over the Stelvio. It’s a testament to the engineering of that period that the location of the road has changed little in the intervening 200 years! Officially, there are 75 numbered hairpin turns, 48 on the east and 27 on the south, but history has failed to record that there were actually 50 turns on the eastern side—two stone markers low down were knocked over by errant car drivers and have long since been forgotten. 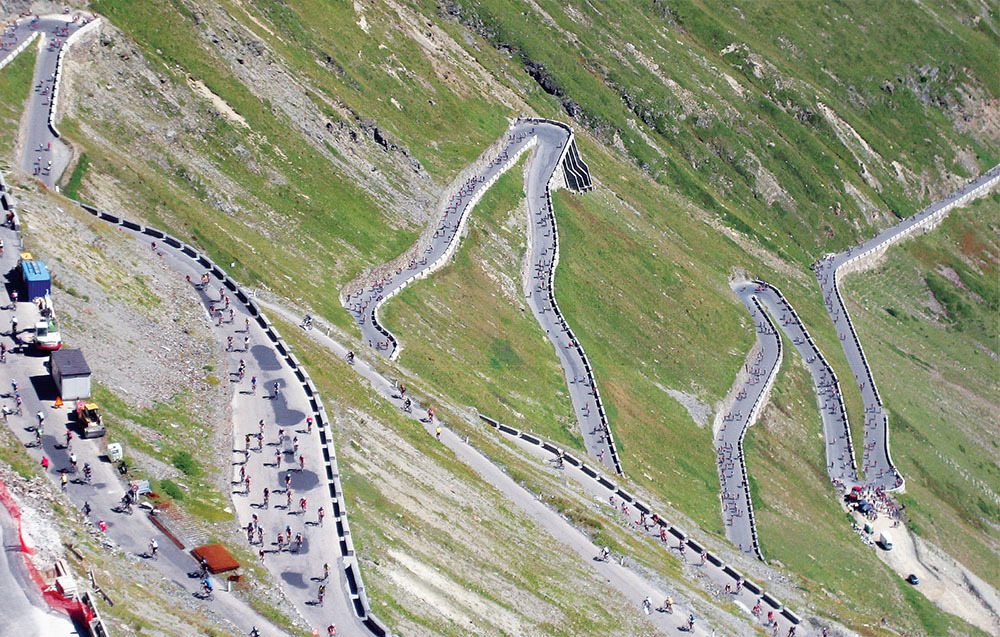 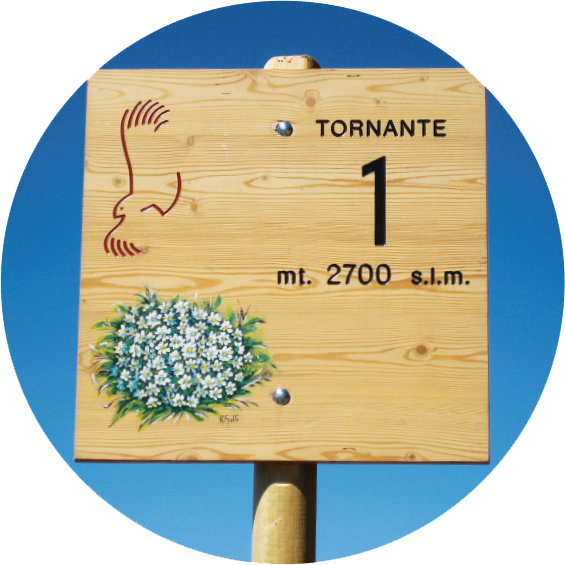 By World War I, Italy’s unification had moved its border with Austria to the top of the Stelvio. Unlike World War II, when Benito Mussolini was allied with Adolf Hitler, Italy delayed choosing sides in World War I until 1915 after it had finished bargaining with both the Allies and the Central Powers for the spoils whichever side should win. The Allies offered the Sud Tirol, a huge chunk of mountainous terrain currently held by Austria, and that proved to be enough to entice Italy to fight for the “good guys.” With the Stelvio Pass being the border between Italy and Austria, fierce battles raged on its slopes in all types of weather—the snow and cold of winter proving to be just as fatal as enemy bullets.

There is a hard-to-find museum on top of the pass that contains exhibits depicting the battle conditions and armaments used during the conflict as well as some interesting photos showing construction of improvements to the road over the years. The Bank of Sondrio building houses the museum and is definitely worth searching out once you have reached the summit.

With Coppi’s drubbing of Koblet in that 1953 Giro, the history of the Stelvio and its impact on professional cycling had begun. Behind the 2,860-meter (9,380-foot) Cime de la Bonnette and the 2,764-meter (9,068-foot) Col de l’Iseran in the French Alps, the Stelvio is the third highest continuously paved pass in Europe and at 2,757 meters (9,045 feet) it’s only navigable from late May to early November. And because it’s the highest paved pass in Italy, whenever it is included in the Giro it is the location of the Cima Coppi, the special prize awarded to the first rider across the peak.

With all the history and difficulty of the climb—a 1,824 meters (5,984 feet) ascent from the east and 1,549 meters (5,082 feet) from the south—one would think it would be a mainstay of Italy’s greatest stage race. However, it has been included only 12 times, with just four of those being summit finishes. Part of the problem is that with a mid-May to early June time frame, the Giro is just too early for the 9,000-plusfoot pass to always be free of snow.

Certainly, you could send snowplows up there in April and early May to clear the road, but the sides of the upper slopes of the pass are so steep that avalanches are a real danger well into early summer. In 1975, as the Giro departed Bormio for an ascent of the Stelvio, race director Vincenzo Torriani had to remind drivers in the race caravan to avoid sounding their horns for fear of starting an avalanche.

Even with only 12 visits, the Giro is rich with Stelvio history. In 1961, Belgian Rik Van Looy tried to win the Giro with a bold attack on the lower slopes but lost seven minutes in the last 10 kilometers and ceded victory to Charly Gaul, the Luxembourger’s last major victory.

In 1980, the race crossed the Stelvio from the east, but the devilish organizers added 50 miles from the top to the finish in Sondrio in an attempt to blunt the advantage of pre-race favorite and ace climber Bernard Hinault. But Hinault’s directeur sportif, Cyrille Guimard, was prepared for the challenge. He sent three of his riders up the road ahead of the peloton, with one of them Jean-René Bernaudeau eventually climbing the Stelvio alone with a three-minute lead on Hinault, who dropped the race leader in a solo chase.

The two teammates linked up over the summit and worked together for those 50 miles to Sondrio, where Hinault gifted the stage to his teammate as he donned the race leader’s pink jersey. They had put over four minutes into their closest chasers. Bernaudeau went on to be a successful directeur sportif for several French teams including the current Total Direct Energie squad. He also owns a restaurant near his hometown, fittingly named the Stelvio, to commemorate his famous stage win.

In 1984, the Stelvio was scheduled to be the most difficult test for the Giro participants, but a bespectacled Frenchman, a year after his first Tour de France win, changed all that. It looked like Laurent Fignon had the suds to beat Italian star Francesco Moser and the crowning of “the professor” was due to come on the Stelvio stage. Mysteriously, the Stelvio was dropped from the race route at the last minute, with the organizers citing impossible snowy conditions—on a clear day. This virtually ensured the overall win for national hero Moser. It is Italy, after all. Fignon would return to win the 1989 edition a month before his epic battle with Greg LeMond at the Tour de France.

The 2005 Giro crossed the Stelvio on its way to Livigno. On that day the Stelvio claimed one of its biggest victims. Ivan Basso, who was wearing the pink jersey the previous day and would twice win the Giro in later years, struggled with stomach problems as the race climbed the eastern slopes. He was quickly distanced by the leaders. His agony played out on each of the 48 hairpin turns culminating in a sight rarely seen in pro cycling. Already 18 minutes off the back, Basso stopped at the summit. His directeur sportif, Bjarne Riis, got out of the team car and helped him pull on two wind jackets before the descent, with Basso eventually losing more than 40 minutes by the stage finish.

A little bit of North American history was written in 2012 when race fans also got to see the birth of the man known as Mr. Breakaway. While Thomas de Gendt was doing the thing he now does best—riding off the front to a solo stage victory—Canadian Ryder Hesjedal was battling Spaniard Joaquin Rodriguez as they climbed the Stelvio from the south. Race leader Rodriguez narrowly beat Hesjedal on a rare summit finish but the Canadian limited his losses enough to claim the pink jersey by 16 seconds on the final stage of the race, an individual time trial in Milan.

It was snowing atop the Stelvio in 2014 when Colombian Nairo Quintana rode away with a teammate from a slowing peloton after race officials had raised a red flag to signal that the race was being neutralized because of the harsh conditions. It wasn’t clear if the race had been officially neutralized, and while the riders didn’t stop pedaling teammate descended the east side of the Stelvio. The gap was never closed and Quintana would win the stage and eventually take his first grand tour victory.

“When you gotta go, you gotta go” was the moniker for Tom Dumoulin’s efforts on stage 16 of the 2017 Giro. The stage made two ascents of the Stelvio the first being from Bormio up the south side. After descending the eastern side, the peloton looped north and west to Santa Maria for an ascent of the third way up the Stelvio, via the Umbrail Pass, which climbs from the northern, Swiss side. Dumoulin could no longer hold it and pulled out of the lead group, rushed behind a bush and dropped his shorts. He chased all the way up the Umbrail and down the descent back into Bormio, reducing his time loss just enough that he was able to win back the pink jersey on the final stage’s time trial in Milan.

While the Giro has catapulted the Stelvio into cycling history, mere mortals have the ability to experience the pass for themselves and if they do so on Stelvio Day, when bicycles are the only vehicles allowed on the road. Usually held on the last Saturday in August or the first Saturday in September, 12,000-plus cyclists from all over the world come to one of the meccas of cycling. The majority ride the most iconic eastern side then make a loop by descending the Umbrail. Regardless how you make it to the top a good time is had by all.

For those wanting to feel the complete experience, make sure you stop in the tourist office on the Stelvio summit to get, for a small fee, a certificate commemorating your ascent. You can also buy a replica marble trophy of the Giro’s prestigious Cima Coppi and take a photo alongside a statue of Fausto Coppi found on the south side of the road. If you have no taste buds you might also want to take a nip of Braulio, a feisty liquor made from herbs found on the Stelvio’s hallowed slopes.

Whether you climb the Stelvio from the east, south or north, an ascent of this legendary pass is both difficult and memorable. As the road goes steadily upward new, incredible vistas greet you from around every corner and while it might seem you will never get there, the top will arrive, hopefully sooner rather than later. And then you get to rip down the other side!