During the first half of the 20th century, as Flanders prospered economically, many of its roads were resurfaced with asphalt. The long stretches of cobblestones that characterized early editions of the Ronde van Vlaanderen vanished, so the organizers began looking for new ways to preserve the race’s identity. During the years following World War II, they discovered the bergs of the Flemish Ardennes, roads and tracks that climbed the many hills of East Flanders. These roads were used only by locals and untouched by the municipal authorities. They were sinuous and steep. Most importantly they were made of Belgian blocks.

A few kilometers south of Geraardsbergen, just over the language border in Wallonia, lies the Lessines quarry. Here, since 1862, and at the nearby Quenast quarry, porphyry stone has been excavated. An igneous rock formed of fluid magma 500 million years ago, porphyry was first discovered at Lessines in the 15th century. And once the locals established that its hardness and durability made it perfect for road building, they recruited gangs of convicts for a spot of hard labor. The stones that their backbreaking work produced came to be known as setts, Belgian blocks or, in Italy, sampietrini, where they were first used by the Romans. Strictly speaking, setts are different to cobbles, the latter being a more natural rounded shape and generally found rather than shaped by man’s hand. But let’s not worry about that too much—the sett classics doesn’t have quite the same ring to it, does it? 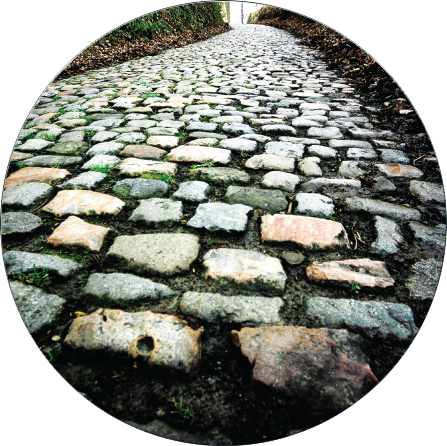 Soon the gray blocks of Lessines covered roads right across northern Europe, including the farm tracks of Paris–Roubaix. The boulevards of St. Petersburg were laid with them. Even the most famous road in cycling, the ChampsÉlysées in Paris, is made from interlocking arcs of porphyry stone. And, farther away still, the same Belgian setts were shipped to New York City where they were laid in Soho, the West Village, Tribeca, the Holland Tunnel and in the construction of that great city’s docks. Belgian blocks can also be seen in Chestnut Hill and Germantown in Philadelphia and Richmond, Virginia—where they were ridden on at the 2015 world championships.

Other than heritage projects and the driveways of discerning cycling fans, setts are not so much in demand these days. The quarries at Lessines and Quenast stopped producing them in the 1950s. Their focus recently has been producing gravel for infrastructure works such as the Channel Tunnel, the Delta Works in The Netherlands, and the TGV rail lines that crisscross France. But thousands of ancient stones from those quarries lie quietly on small lanes around Oudenaarde, waiting for the spring, waiting for those crazy cyclists. 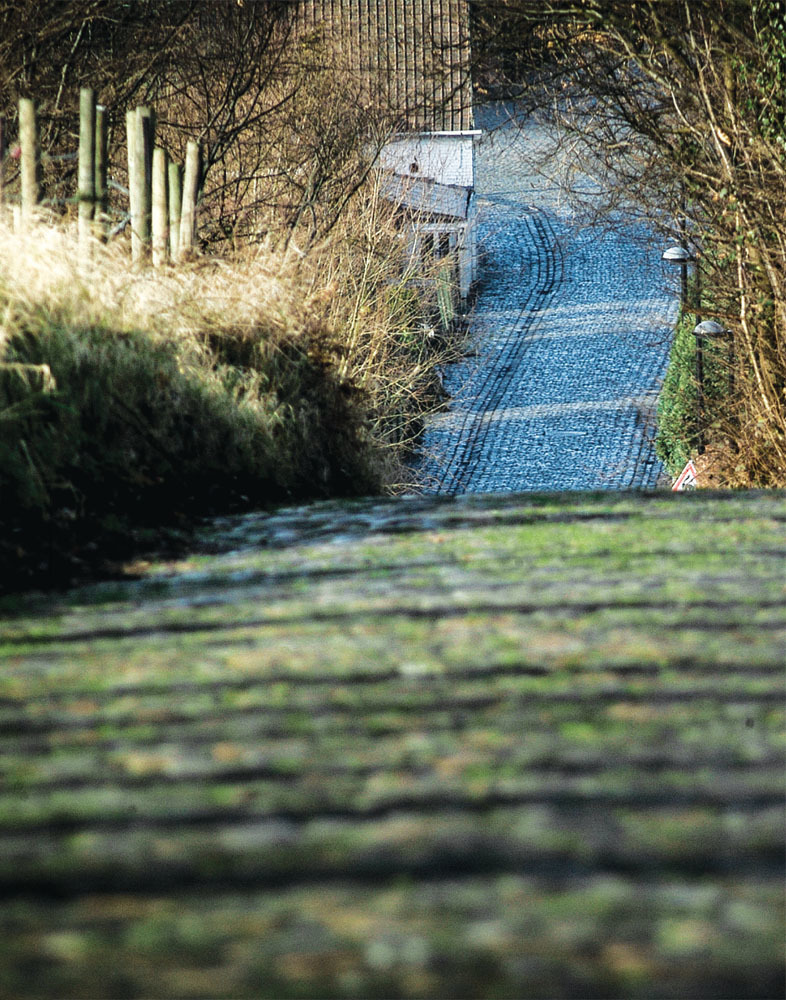 Above ground, too, the Flemish Ardennes are a special place. Though towns and industry are never far away, the hills over which our heroes race have a unique and thriving ecology. Unsuitable for mass-farming techniques, the landscape has remained a patchwork of forest, pasture and small fields for centuries. The woods have diverse species of tree and are particularly rich in ash, alder and beech. Some of the woods are famous for their bluebells, while the sunny hillside pastures shelter many rare wildflower species, including purple toothwort and golden saxifrage. Over the past 20 years many small nature reserves have been established in the area, and agricultural methods sympathetic to the landscape are encouraged.

Through their deep connection with Flemish history and identity, the cobbled classics have helped to illuminate and protect what might otherwise have been a fairly anonymous corner of Belgium. That’s something we can treasure, all year round.