Ode to a Legend: Mont Ventoux From Issue 88 • Words and Images by James Startt How many words have been written about Mont Ventoux? Millions, no doubt, including a number of books. Already in the 14th century it inspired the Italian poet Petrarch to write about climbing it on foot. As for cycling up the mountain, you probably know the big stories. They include, in no particular order, Louison Bobet’s brilliant solo attack over the summit and down into the Papal city of Avignon in 1955, a ride that won him his third consecutive Tour de France. Then there was the memorable individual time trial in 1987, won by promising hopeful Jean-François Bernard, who grimaced, quite literally in tears, as he rode up the final pitches. And there was the unlikely triumph of the statuesque Eros Poli—a patented non-climber—over the summit and into Carpentras, making the 6-foot-4, 190-pound Italian a most unexpected stage winner in 1994. And of course there was July 13, 1967, the day when popular British rider Tom Simpson collapsed and died barely one kilometer from the top, with the Ventoux’s iconic weather tower well in sight.

Those are the big stories. But really anyone who has climbed this mythic mountain has their own story. Climbing the Ventoux is like that. It is a giant of a mountain and it always leaves an impression.

The French call Mont Ventoux the Giant of Provence, a name that is easily understood for the way in which it towers over the Provencal countryside. Peaking at 1,909 meters (6,263 feet), on paper it is dwarfed by dozens of climbs in the Alpes and Pyrénées when it comes to pure altitude. But the Ventoux is unique. It climbs from virtual sea level, with the final 6 kilometers above the tree line visible for miles around, making it a constant focal point in this rolling terrain of vineyards and lavender fields. And, of course, for much of the last century it has provided a defining challenge for cyclists.

Perhaps what makes the Ventoux so special is that, unlike so many climbs made famous by the Tour de France, it does not finish in a ski resort—most of which do not have the same charm in the summer months as they do in the winter. No, the cyclist on the Ventoux is not riding under chairlifts and other remnants of the ski season. On the Ventoux, a cyclist climbs largely alone in nature, firstly through the trees of the lower sections and then amid the fields of barren limestone that cover the final ridge and summit.

It’s a brutal climb, with virtually no switchbacks to give riders a chance to regain momentum. When Swiss rider Ferdi Kübler attacked at the foot of the Ventoux in 1955, French rival Raphaël Géminiani yelled over to him: “Be careful, Ferdi! The Ventoux is a climb like no other!” The winner of the 1950 Tour, who did not heed Gem’s words of caution, blurted back, “Ferdi is not a rider like the others.” Even so, Kübler crumbled on the climb and at the finish, well behind Bobet, the hero of the day, Kübler dropped out of the Tour. Utterly defeated, he said simply, “Ferdi is too old. Ferdi is dead. Ferdi was killed on the Ventoux!”

But despite the Ventoux’s difficulty, a cyclist forges a certain relationship with this singular climb. Until recent decades, the road was narrow and bumpy, which accentuated the challenge of climbing it on bikes that were 10 pounds heavier with much larger gears than today’s carbon-fiber machines. But riding up the Ventoux today on smooth blacktop still offers an uncommon communion between human effort and nature.

There are numerous roads that lead to the summit, the most central being the road from Bedoin on the mountain’s southern face and the other from Malaucène on the northern face. Of the two, the Bedoin side remains the reference, perhaps because it is considered at least marginally more difficult. Or perhaps the southern face is visually more complete. Climbing up the north face, the summit of the Ventoux is often out of sight. But as soon as a cyclist leaves Bedoin, some 20 kilometers from the summit, the rocky peak of the climb quickly comes into view. And once out of the trees on the sweeping left turn in front of the Chalet Reynard inn, the summit dances dramatically into and out of view of cyclists climbing the final 6 kilometers, with only the repetition of yellow and black or blue marker posts for company.

Interestingly, while the Ventoux has often been showcased in Paris–Nice, the Critérium du Dauphiné and the Tour de France, there had never been a single-day event that finished on the mythic mountain—until now. That changed on June 17 when the first-ever Mont Ventoux Dénivelé Challenge, a UCI-sanctioned 1.1 professional race, was held.

Starting in picturesque Vaison-la-Romaine, a town built on elaborate Roman ruins, the 173-kilometer course looped through the roads of the Vaucluse in the heart of French Provence before finally tackling the Giant.

Initiated by the organizers of the Santini Granfondo Mont Ventoux, the Dénivelé Challenge—literally “the altitude difference challenge”—attracted a few World Tour teams, including EF Education First led by American Joe Dombrowski and AG2R La Mondiale led by popular French climber Romain Bardet. These two riders came from different directions. For Dombrowski, the Dénivelé Challenge represented his first race back after a strong Giro d’Italia, while Bardet arrived on the heels of a late-night drive directly from the finish of the Critérium du Dauphiné in western Switzerland. Nevertheless, both recognized the unique qualities of this inaugural race.

“Le Mont Ventoux is a mythic climb that fascinates all cyclists,” Bardet said before the start. “And after a Critérium du Dauphiné lacking big climbs, this was a good way to continue my preparation for the Tour de France.”

Hosting a pro race on Mont Ventoux was nothing short of a dream come true for race organizer Nicolas Garcera. A cyclist who lives in Vaison-la-Romaine, Garcera admits that the Ventoux is simply part of his DNA. But he is proud to open this new chapter in the Ventoux’s cycling history.

“We’ve done the granfondo for five years,” Garcera said. “The idea was to give amateurs the same structure as a pro race, with Mavic neutral support, etcetera. We were the only event in France to propose such a structure and the idea of actually organizing a pro event came from that. In addition, we come from here, from Vaison-la-Romaine, and there is no pro race in the Vaucluse. The Vaucluse is a real land of cycling and cyclists flock here year-round. And yet, outside of an eventual stage in the Tour de France or the Dauphiné, there are no pro races here. There are also no one-day races for pure climbers. So why not have a one-day race that finishes on the Ventoux?” 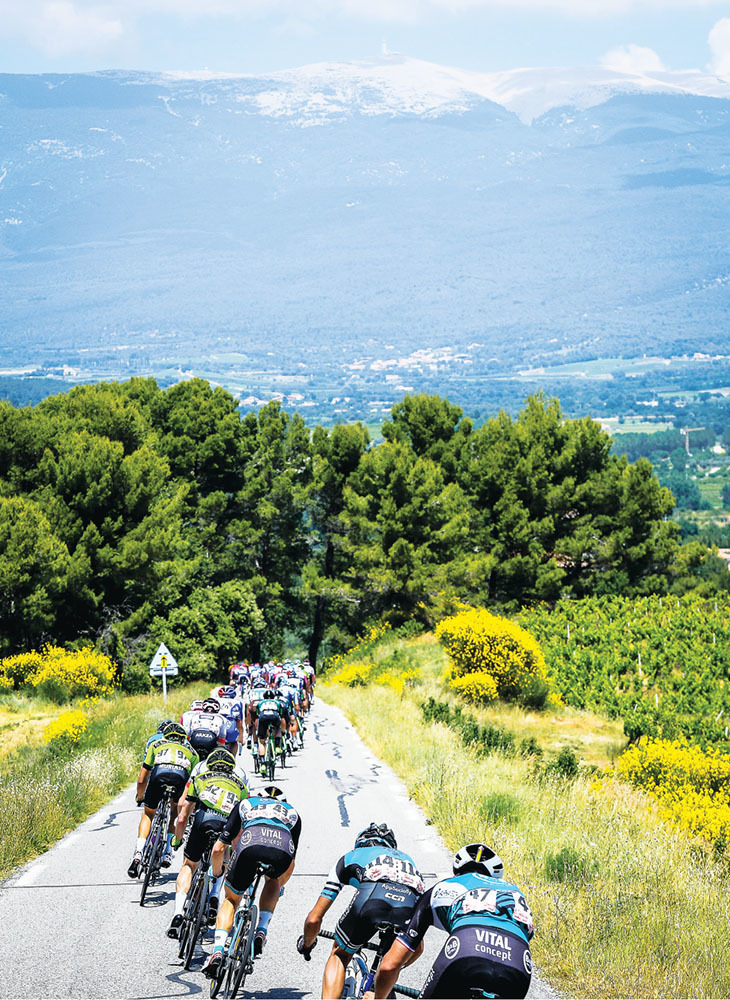 Garcera, while modest and soft-spoken, has to be happy with the interest in the inaugural edition, as the race boasted more international television coverage than this year’s Milan–San Remo. And while the peloton was thin—fewer than 100 starters—numbers never really matter once a pack hits the first pitches of the Ventoux.

The AG2R team, riding a high tempo, soon took over the front positions, and while two-time Tour podium finisher Bardet forced the final selection before breaking through the tree line, he could not shake off Spanish climber Jesús Herrada of Cofidis—who, without the fatigue of the Dauphiné in his legs, proved fresher at the finish. Bardet was clearly disappointed as he hoped to write the headline to this new chapter on the Ventoux. But bike racing is like that sometimes. And, of course, Mont Ventoux offers favors to no one. Just ask Ferdi Kübler….

Also check out: Peloton Flashback: Andy, the Badger and the Alpe