Looking Up in Ethiopia From issue 82 • Words by Giulia Lacivita; Images by Antonio Bigarini It’s a very hot morning and I am enjoying the first mango juice of the season in a bar in the center of Mek’ele, the capital city of Tigray Province, in northern Ethiopia. Like me, Mek’ele is slowly waking up, with people busying themselves on the wide square in front of me. With no big expectations, I turn to the man at the bar and ask him if he knows Tsgabu Grmay, the most famous Ethiopian racing cyclist, who’s ridden all three grand tours and currently rides for Trek-Segafredo. Chances are not high, but I know that Mek’ele is his hometown, so why not give it a try. The bartender doesn’t speak English, but he starts dialing numbers on his mobile phone and finally seems to reach someone. He looks excited. After a few minutes, a young guy comes into the bar. He speaks good English and points to a man on the other side of the square, next to an old yellow car. “That’s Tsgabu’s father,” he says, so by luck I end up where he parks his taxi everyday.

Tsgabu’s father, who was once a bike racer himself, smiles as we get closer. He wears an old jacket covered in cycling patches, big glasses and a baseball cap. As soon as he understands why we are there, he tells us proudly that Tsgabu is not in town, but in Abu Dhabi racing the Abu Dhabi Tour. But luck is still on my side, because it turns out that Tsgabu’s former team, the Trans Ethiopia Cycling Club, is about to start training not far from Mek’ele. Ultimately, what I am after is getting closer, to learn about cycling in a country not famous for it, and something I rarely read about in the media. But Ethiopia seems to be a perfect place for cycling. And Mek’ele, which sits at almost 8,000 feet above sea level, is the place to be on this burning-hot morning.

Ten minutes later, I’m sitting in Tsgabu’s father’s taxi and we’ve left downtown Mek’ele, driving through Tigray’s beautiful hills and valleys in search of the training team. The streets are perfectly paved. Indeed, the whole place seems to be made for cycling. Then, like a vision in the desert, a peloton of riders appears in the distance. It seems that the old Lada, like a team car from the ’60s, doesn’t have the power to catch them…and the donkeys and cows wandering across the road don’t help.

Slowly, we get closer and start to overtake the riders, one by one. There’s no team uniform and their bikes are not all the same, not even all carbon. But the riders are flying. Each one of the young guys smiles at us as they climb the steep, long hills in almost-40-degree weather—that’s 100 degrees Fahrenheit! Unbelievable. Then the team car drives up. It’s an old pickup with a man standing in the back who shouts advice at the riders. When he sees us, he calls over to us, inviting us to lunch at the training camp in Mek’ele, where the peloton is headed. 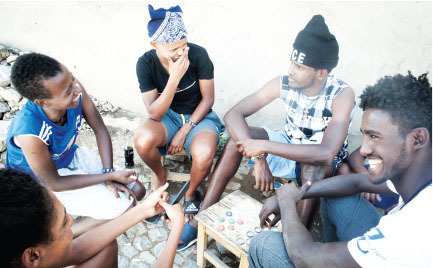 The Trans Ethiopia Cycling Club was established in 1990. It started out with just five riders, who had to train on the only paved stretch, 100 kilometers between Maymekden and Adrigrat—which is up near the Eritrean border. The whole situation changed, the team manager and trainers say proudly, when China began to make investments in Ethiopia, building new roads or renewing those that the Italians started during their occupation in the 1930s. That was the real trigger that made cycling spread in this northern part of the country. 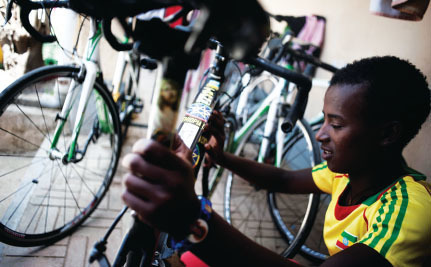 Today, the Trans Ethiopia team has 28 riders, 16 men and 12 women. Their base is Mek’ele, where they live and train. But this isn’t the only team now. Just in Mek’ele, there are six other teams, including the two best-known ones, sponsored by Guna PL C and Mesebo Cement Factory. In Ethiopia, it is hard to even buy a cycling jersey, not to mention professional bikes and parts. But the cycling scene there has big potential, its development dependent upon investment from the West and the East. So maybe soon there’ll be more riders like Tsgabu Grmay coming out of Africa.

Also check out The Sven Master