No one died of dysentery. There weren’t any encounters with “hostiles.” Scurvy was kept at bay. No prairie schooners broke down. No riders or livestock were lost. And, unlike the hundreds of thousands of pioneers of yore who braved the 2,000-mile Oregon Trail route from Independence, Missouri, to Oregon City, Oregon, participants had to cover “only” 350 miles in the span of five days. Yup, I’m talking about the inaugural Oregon Trail Gravel Grinder (or OTGG), a first-of-its-kind gravel stage race that traversed some rugged and remote alpine zones in the Deschutes and Willamette National Forests, where racers literally traced history by riding some of the very same wagon-train roads used by the early pioneers.

The OTGG is the brainchild of Chad Sperry, an event promoter with two decades’ worth of experience that includes such iconic races as the Tour of Utah, Mount Hood Cycling Classic and Cascade Cycling Classic. Chad knows a thing or two about event production and, as of late, he has turned his attention to gravel. According to Chad: “As riders are fleeing from road racing, and even road riding in general, due to ever-increasing traffic and greater safety concerns with distracted drivers, gravel is becoming a sanctuary for these riders.” 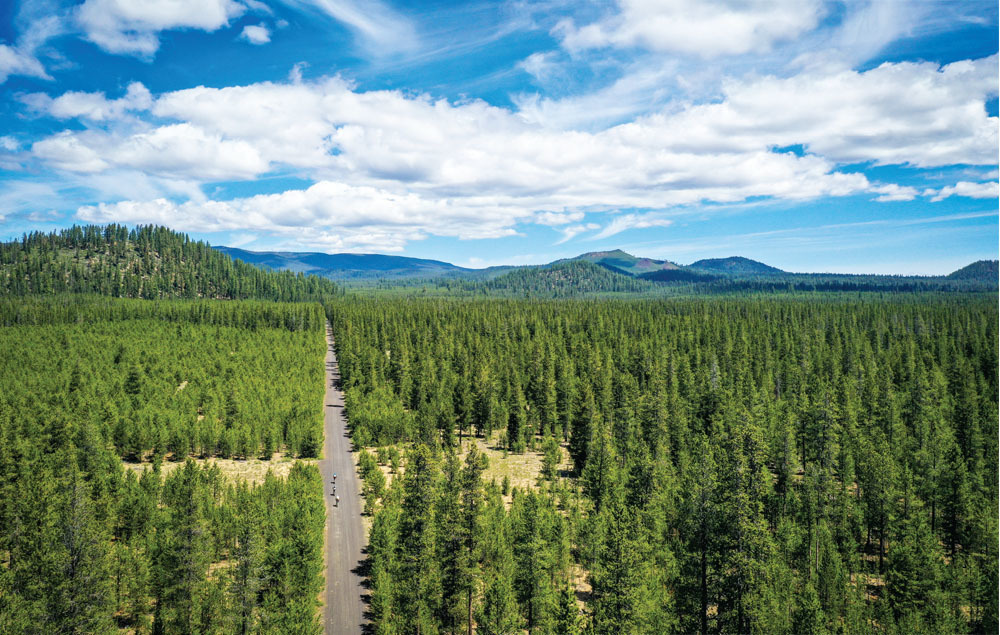 What is OTGG? It’s a challenging point-to-point, five-day gravel stage race that explores regions where you can still find historic wagon ruts, old-growth forests and high alpine vistas. Chad said, “We wanted to create a big five-day stage race that offers both a super-tough course for pros and accomplished amateurs and a moderately difficult course focusing on attracting recreational riders looking to challenge themselves.” Mission accomplished.

How did each day unfold out on the Oregon Trail? Well, daily preparations began at 6:30 a.m. with coffee, served very fittingly out of a prairie schooner of sorts—a late 1970s Volkswagen van retrofitted to dole out copious amounts of morning motivation. Hearty breakfast grub was next and then the daily two-step of tent breakdown, race-day prep and gear packing began. With stages starting at the respectable time of 8:30 a.m., or thereabouts, the mornings didn’t feel too hurried or hectic. And with the exception of one stage, all started with neutral roll-outs of various lengths, which was a great way to shake off sleep, build camaraderie among the pedaling pioneers and get a good warm-up in the process. 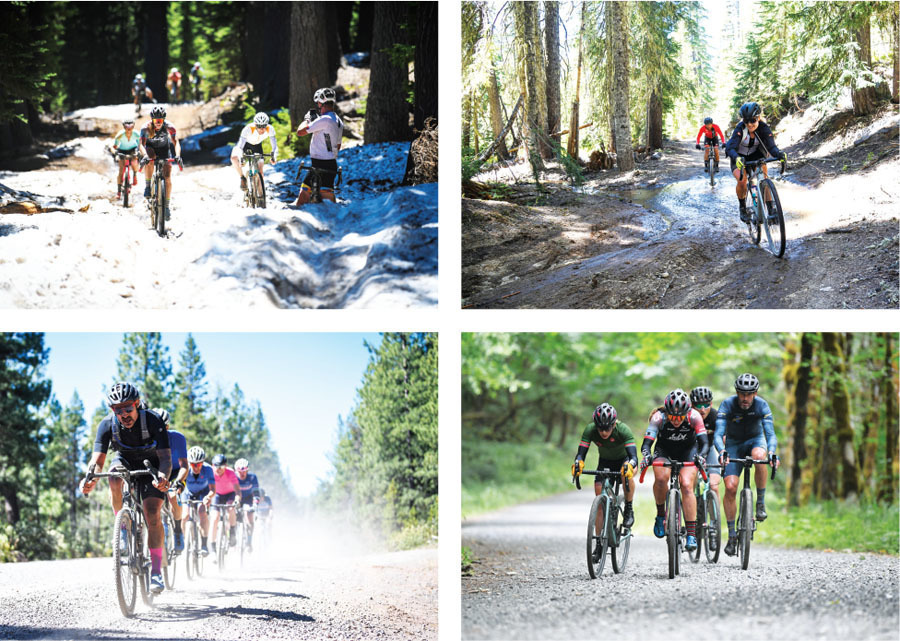 “By the time you hit the historic Santiam Wagon Road at mile 16.2 it is a full-on tough time. Remember that all wagon roads are rough, rutted and challenging! Riders will cross creeks, rocks and sand for the next 3 miles before reaching Aid Station 1.” When these words are the official race message for stage 1, you know you’re in for a real humdinger. Chad’s a straight shooter when it comes to course conditions, so it wasn’t surprising that the wagon road ate a few folks—but, boy, did it make for a kick in the pants. And the ripping 12-mile descent to the finish filled riders with so much stoke that they forgot about the rutted-road misery earlier in the day.

So what were the other stages like? Well, we pedaled through pioneer history, tackled massive fire road climbs that followed tracts of harvested forests, traced old wagon roads through the Cascades and experienced remote zones that very few folks get to see, even Oregon locals.

Unlike the early pioneers who had to manage their own food, livestock, gear and wagon loads at the end of each weary day on the trail, OTGG participants were well taken care of by the event crew that did everything from help breakdown and set up tents to load luggage and make sure there were snacks and beer at the finish. And speaking of the finish, on two of the five days there was musical entertainment to be had and bucolic riverbanks to sit by, while soaking in the Oregon outback beauty.

Looking to hitch your two-wheeled wagon to an epic event? Enjoy exploring remote terrain? Like breathtaking views? Dig riding various types of gravel? Well, check out the Oregon Trail Gravel Grinder, this five-day gravel race will take you deep into the Wild West of the Cascades. Go on, give OTGG a try in June 2020. Cuz who doesn’t want to be a pioneer?