That rookie ride turned into nothing less than a Cinderella story on stage 10 when he jumped into an early breakaway and soloed to victory. Since then he has confirmed his early promise, scoring at least one victory every year, with stage wins at the 2017 Tour of Utah and this year’s Tour du Haut Var, while last year he won the Italian semi-classic Tour of the Apennines. His successes will likely continue now that, at 24, he has stepped up to the UCI WorldTour with American team Trek-Segafredo. We caught up with the happy-go-lucky Ciccone to talk about his greatest victory to date and his goals with his new team.

You come from Bergamo in northern Italy, which is often the finish town for the Tour of Lombardy classic. Was that the first bike race you ever saw? Do your remember the first time you saw it?Well, I started following bicycle racing in 2004 or 2005, but it was the 2006 or 2007 races that I remember the most, because that is when Paolo Bettini won. I have done it three times now as a pro and it is just a beautiful race, a great way to finish the season out.

Was Bettini your hero growing up?Sure! That said, my big hero was actually Alberto Contador. He was just such a strong rider and I loved the way he was always attacking. It was just fantastic.

How did you get into cycling?Well, my father was always very passionate about the sport and growing up he would always take me to watch races. And then I started riding in 2003 myself. I was only 8 years old. But ever since then, I only wanted to be a professional cyclist.

Well, you realized your dream; and more than that you have had a great start to your career. You’re only 24, and you’ve won races every year, but no victory could have been better than your first one, when you won a stage of the Giro d’Italia in your rookie season. That’s no small feat!Yeah, it was just unbelievable. Already doing my first grand tour and the Giro no doubt in my first year as a professional was pretty amazing. And then to win a stage was just incredible. I’ll never forget that day. For me just making the breakaway [on the hilly stage from Campi Bisenzio to Sestola] was important, because I was in the break with big riders like Visconti, Cunego and Atapuma. There were like 11 or 12 of us, but I never thought we would stay away to the finish, let alone that I would be the strongest and actually win. But the day just went better and better. And then just before the last climb I decided to try my chances and attack. And it worked! I stayed away to win at the finish. It was just incredible!

So what gave you the idea to attack? I mean you were a neo-pro on a small Italian team and you are in a break with some bigname riders, including a former Giro d’Italia winner, and you decide just to launch an attack before the final climb?To be honest, I don’t know. I just had a flash thought that this was the moment to attack and I should try my chance. And that was it! It was just amazing. But then the next year I didn’t win a stage or the year after. But I’ll keep trying—and that’s one reason that I came to Trek-Segafredo. 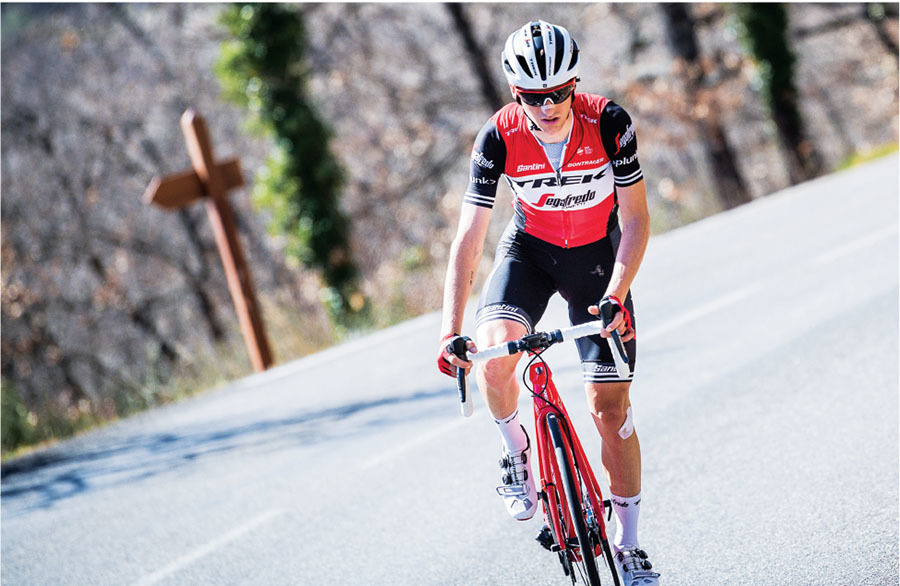 So, now you are starting out your first year in the WorldTour with a very established team. That’s a big jump up for you, but one that can have real advantages, right?Absolutely. It’s been great and I am really happy to be in a team like this. I just have a lot more opportunities in a lot more big races. For me, it is really important to have an opportunity to work with experienced champions like Richie Porte, Bauke Mollema or John Degenkolb. It’s just a great way to learn and improve. Sometimes, in races like Paris-Nice, I have a lot of opportunity to attack and play my own cards. But in other races I will be focused on working for Richie or Bauke. And for me that is just as important. I’ve already ridden with Bauke this year in Mallorca. It’s pretty amazing to be wearing the same jersey as these big champions.

And when you have a chance to ride for yourself; what kinds of races suit you the best? Mid-climbing races like the stage you won in the Giro?Yeah, for the moment, stages in races. And then we will see in years to come.

And if your dream could come true, what would it be?The Giro d’Italia, or at least to wear the pink jersey once in my life. But I think that I have the possibility to develop into a good grand tour rider. That is definitely my dream!

“AND THEN JUST BEFORE THE LAST CLIMB I DECIDED TO TRY MY CHANCES AND ATTACK. AND IT WORKED!”