Tell us how long you have been in business and how the distillery was created?

Seven Three Distilling Company came into existence on the heels of another distillery development project that did not progress. The prior project had multiple problems including burdensome zoning restrictions. So Sal and Eileen Bivalacqua jumped in, rolled up their sleeves and developed the concept and brand on a timeline crunch while overseeing the build-out of a custom distillery. In conjunction with Tilt Marketing, the brand went into development in 2015 and the distillery opened its doors in March 2017. We are about to celebrate two years in the business! 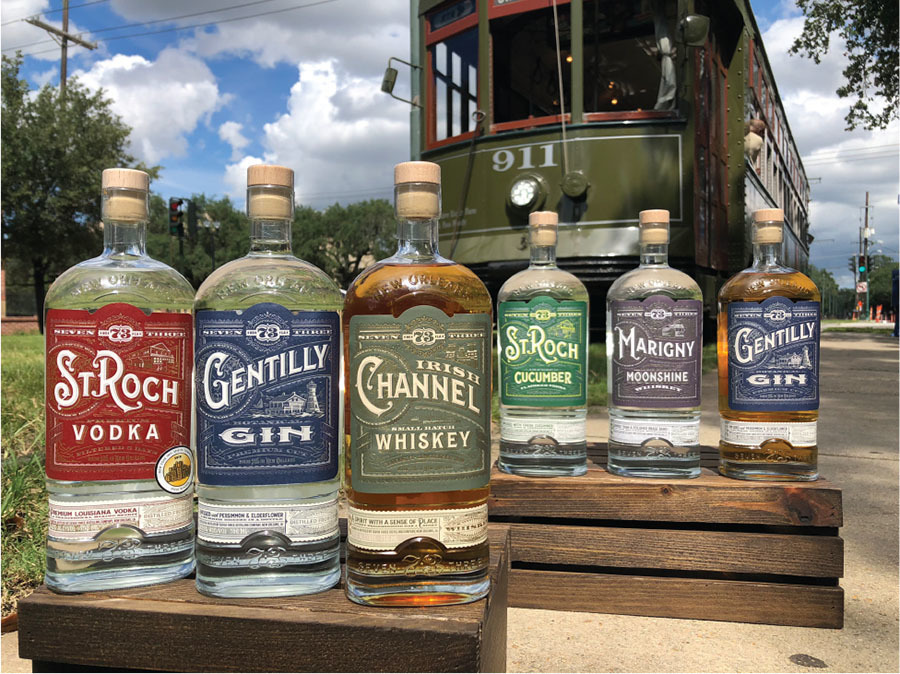 Can you talk a bit about the 73 neighborhoods that make up New Orleans and how they inspired the distillery’s name?

Anyone that spends time in New Orleans knows that the people here are the city’s true assets. Each corner of New Orleans has historic significance, as people tend to live and work in their discrete neighborhoods known as faubourgs. While technically the French word translates as “suburb,” in New Orleans it refers to a neighborhood or place. These distinct areas have their own character, commerce and feel. Some know the famous ones like Treme, the French Quarter, the Garden District and Desire—which wasn’t just a streetcar by the way. Seven Three Distilling’s brand is inspired by all of the city’s great faubourgs like St. Roch (historically African American and in the heart of the Seventh Ward), Gentilly (considered the Garden District of the more working class) and the Irish Channel (home to the Irish families that literally built the public projects like the great canals in the 19th century). New Orleans is a true melting pot of people and is defined by its diverse population. Seven Three Distilling strives to be New Orleans.

We have tried a selection of your offerings and were blown away at the quality and unique character. Which product do most people request and what should we know about all your offerings?

Wow, that is hard, because we believe they all have their fans! The two that seem to stand out are the Gentilly Gin and the Irish Channel Whiskey. We barrel finish the gin as well for a version that gets a character to it that can substitute for whiskey in numerous drinks, including some of our house-crafted cocktails like the Gin Old Fashioned. While we are currently aging Louisiana rice whiskey for an independent release, the current American Blended Whisky may be our star performer in many ways. We continue to receive very positive responses from outlets and customers alike. Word on the street is that at least a few local watering holes are saying they have replaced more traditional Irish Whiskeys with ours!

Tell us what a typical day, maybe a weekend day, is like at the distillery?

The distillery remains a hotbed of activity on a daily basis. Erik Morningstar, our head distiller, is in the production area all week. In addition to hatching amazing products and ensuring that our brands remain consistent, he oversees a team that bottles and labels (by hand!) two or three days a week. Basically, he makes sure the back of house is in smooth working order at all times. Our front-of-the-house manager, Tristan Johnson, spearheads the experiences in both the tour realm and the tasting room. Our head bartender, Devin, has developed an entire line of liqueurs, amaros and bitters so that our bartenders can pour a craft cocktail list we would put up against the best cocktail lounges in town! Whether there is a sporting event happening or just another Thirsty Thursday, we see lots of customers who come to imbibe in our tasting room and gather for social events. In the tour realm, Tristan oversees a number of daily tours for the folks that visit and want to see the way we operate, how our spirits are made and have a taste of what we have to offer. Woven into the tour experience is a large amount of New Orleans history—with an emphasis on Treme and the now defunct Storyville District that make up significant local histories surrounding the manufacture and sale of alcoholic beverages.

Have you lured the cycling community of New Orleans to visit?

Absolutely we have!! In addition to supporting Pablove both locally (by hosting several events) and through a rider or two, we have been active in the cycling community generally! For 2019, we are a sponsor for a large local riding club, The Semi Tough Cycling Club, and its affiliated racing team, Urban South Racing. Additionally, we have sponsored several local cycling charity events like Beth’s Friends Fondeaux hosted in May by Beth’s Friends Forever. We have also been a stop on various cycling events, including the Big Easy Second Line event that takes place during the Bayou Boogaloo. We also have a shiny, new bike rack sponsored by Bike Easy New Orleans.

If we planned an event with Seven Three, what cocktails would you serve?

We are prepared to tailor our menus to any event! Our line of products (with the Black Pearl Rum just coming on line this quarter) enables us to feature a wide variety of drinks catering to any taste. Some of our favorites for events at the tasting room include The Colombo (Irish Channel Whiskey, smoke essence and coconut!) and Spice Islands (Gentilly Gin, chai and candied pineapple!). The St. Roch Earl Palmer is a fan favorite and has been on the menu since we opened our doors, and our Old Boys Club, with our aged rice whiskey and house-made Amaro, gets great response. For the never-ending Louisiana summer, our Cucumber Mojito catches the vibe of our fair city on a warm evening. It’s hard to pick just a few! We should note though that all of our cocktails can be served at distillery events. And our bartenders will come up with some unique cocktails just for your event—we have already asked them to check out a copy of PELOTON to come up with the “Ojai Peloton” just in case.

Can you share a secret recipe with our readers, and can they now try or buy your products?

Well, this is great news! Seven Three Distilling is finalizing the paperwork and licensure necessary to distribute in states outside of Louisiana, including the home of PELOTON magazine: California! Our local, homegrown products will be featured in the California markets in 2019 and we plan to begin distribution in San Francisco! We tend to not be very secretive with recipes, as we want our customers to enjoy what we make at the tasting room when they go home with a few bottles. Since this is for the cycling community, we think the Earl Palmer really hits the spot on a hot day after some exertion! Think about gently rocking away on the veranda of an antebellum home in the South on a summer’s day while sipping this cocktail.

Method: Add all ingredients into a shaker and fill with ice. Shake, and strain into a tall glass filled with fresh ice.

Method: Combine water and sugar in saucepan over medium heat and stir occasionally until sugar dissolves. Add blueberries, lavender and the zest of one lime and simmer on low until blueberries burst and release their juices. Cool and strain before serving.

This article originally appeared in issue 86