From one bike to the next, from a collaboration with Berluti to an appearance in a Givenchy ad, from the Chris King Open House to the Concours de Machines, Cycles Victoire never ceases to amaze with bicycles as different as they are the same. Now in its 10th year of existence, this bike company from central France honors steel; it brazes, polishes and paints; but above all it cultivates its singularity.

On my first visit to the workshop near Clermont-Ferrand I was amazed by the refinement of their first bikes, especially the studiously polished welds beneath a golden clear coat. The feeling was magical, the touch was already there, reflecting founder Julien Leyreloup’s uncompromising eye for understated aesthetics and the smallest details. All the ingredients that make a Victoire special were already there. Leyreloup has a vision, an ambition for French steel bikes to be reborn. Also, he had perfect timing to ride the wave of steel’s renaissance. 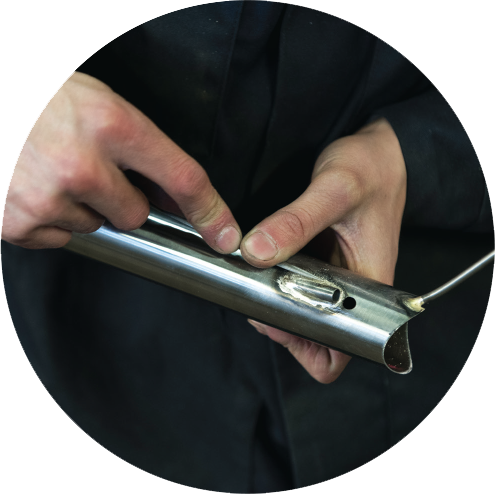 I believe that this last decade was one of the most progressive and refreshing in the whole of the bicycle’s history and created the perfect conditions to launch Victoire. Over these 10 years, fixed-gear riders embraced speed, roadies discovered gravel, transcontinental and bikepacking races emerged, a small clothing brand became Rapha and, of course, steel traveled a long way from vintage to cool to “modern.” It’s obviously too early to judge the impact for cycling in the long run, but for Victoire there is no doubt that this melting pot of cycling trends has been highly profitable.

Far from the glossy world of magazines and prestigious awards at custom-bike shows, the Victoire workshop is as rustic as it gets. It’s situated in the very center of France at Beaumont, a near neighbor of Clermont-Ferrand, and just a few kilometers from where the Auvergne stage of this year’s Tour de France will pass. Here, tubes are cut, filed and welded over the blackened floor of the workshop. The sounds and smells of working with steel float into the vaulted ceiling, while sunlight angles through a high window, creating a singular, church-like feel.

There’s no drama or frenzy; quite the opposite. Just the quiet, focused work of a team building dream bikes, tube by tube. The workshop hosts three welders. Each one builds complete frames, from the cutting of the tubes on a 1936 milling machine to the last stroke of emery paper on steel. Each frame is totally bespoke: fit, tubes, geometry, paint, components. On the building’s first floor and the new showroom above, with its views over the Plateau de Gergovie, the rest of the team welcomes customers, supplies materials, wrenches wheels and bikes and, of course, deals with the mandatory social-media work.

With a team of seven people, Cycles Victoire has found the good balance that enables the company to deliver an average of one bike a week. That could seem a really low rate, but the team also shares its time with a sister company, Distance, producing bikes with less customization, but a nevertheless almost equivalent process and finish. For all these reasons, the delivery time for a Victoire bike stays at between 18 and 24 months.

Leyreloup is foremost a bandmaster, setting everyone to work to the very last detail while keeping his view on the end result—as it’ll be perceived by the future owner. He also welcomes the customers, fits them, listens to them and then translates their abstract discussion into a technical drawing with angles and dimensions.

While management tasks and clients take up most of his time, he nevertheless tries to keep his hand on a share of the work too. Leyreloup recently attended a painting class with Cole Coatings Workshop in London with the aim to complete 100 percent of the paint jobs in house by the end of this year. He sees it as vital for mastery of the final result to stay physically connected to the creative process.

Despite its common distinctive feel, today’s steel is only a distant cousin to the tubes that adorned the bikes of Fausto Coppi, Federico Bahamontes and Eddy Merckx. The last decade was also the place where steel manufacturers introduced new steel alloys on the demand of the aeronautic industry and cycling tube makers evolved their products. It could not have come at a better time for the nouvelle vague of bespoke steel frame builders such as Victoire.

The nouvelle vague has been able to detect all the modernity and potential of the lighter and stronger steels and translate it for a larger audience. The first step was to go with the neo-cyclists who discovered the sport thanks to vintage track bikes. The next step was higher. But the dream machines like those by Victoire helped to overtake big companies on materials and change the dominant thoughts on stiffness, weight and aerodynamics.

With its seamless filet-brazed steel, rid of any sort of nostalgia, heritage or complex, Victoire has been able to speak to the most diehard carbon fanatic. Without rejecting new standards and even integrating the latest innovations the company can sometimes, if it is the customer’s demand, produce race bikes below the UCI’s competition weight limit.

This decidedly avant-gardist approach has produced bikes performing as well as most carbon machines while retaining the distinctive comfort and elasticity of steel. But beyond their timeless beauty and unique finish bespoke steel bikes also offer lifetime usability and give other levels of satisfaction that carbon cannot achieve.

While the company has been really busy since the start, Victoire nevertheless was committed to creating a bespoke association in order to unite their peers, promote collectively their craftsmanship and, finally, relaunch the once famous Concours de Machines in 2016. This traditional institution, which occurred for the last time in 1949, was the theater of rivalry between René Herse, Alex Singer and others when French artisans were producing the best bikes in the world. And they engaged the best cyclists to prove the superiority of their products in 300-or 400-kilometer trials that were the norm of the area.

In its modern form, the Concours has already been won by Victoire twice in four editions, notably for its Paris–Brest–Paris bike in 2019. This machine admirably combined the qualities of steel and the latest bikepacking technologies into a most modern randonneur bike. Victoire integrated fork, stem, light, aerobar and luggage in one elegant front end—a real departure from the Christmas-tree look of the usual long-distance rig.

For Leyreloup, creating a unique machine is like a piece of watchmaking that takes 200 hours of work—way beyond what a customer could have ever imagined. When he can realize his dreams, free from any convention, that’s exactly the type of challenge that drives him. He purposely transgresses codes to create a masterpiece that nobody is expecting. In this regard, Victoire has widely embraced the pioneering vision of its glorious French predecessors.

Whatever the competition result, I never see him as satisfied as when he is at those early mornings of a big event, when he pulls out of his car a bike completed just the night before, with all the details he’d envisioned from the start several months earlier.

It is no secret these the past 10 years have seen a golden era for bespoke frame builders. Nevertheless, very few have achieved what Victoire has done. The bikes are just as soughtafter by slim crit racers as hairy bikepackers; and they have contributed to the renewal of the profession, exceeding by far the one-man business model while remaining true to the strictest bespoke ethic.

So, Victoire has become one of the most influential actors of the nouvelle vague. Day after day, these artisans keep producing elegant frames with their balanced proportions, incredibly smooth welding and subdued colors. This aesthetic first seduced the enthusiastic neo-cyclists and is now taking on the most conservative ones too, along with the most demanding collectors.

Whatever the project and rider, every Victoire client values Leyreloup’s knowledge and experience. If cost and wait are not that different to buying the next superbike, the honeymoon period could not be more different, because Victoire is not only there to build you a dream bike but also to make it a forever bike. A whole other ambition!

From Inside Peloton: 1972, The Greatest Season Ever

Brittany Through Their Own Eyes

Valentin Madouas: “People from Brittany never give up; we stick at it”