Until the mid-1980s, professional cycling in Europe was unquestionably a man’s world. Not only were there few, if any, women working on the support staff of pro teams, but the wives and girlfriends of the riders were discouraged and sometimes even banned from visiting their significant others at the team hotels during races. But when the Americans of Team 7-Eleven stormed onto the scene in 1985 not only were they eager to take on Europe’s best pros but they also had a secret weapon: a vivacious 25-year old blonde Californian. She would change the makeup of pro cycling teams forever.

Shelley Verses was a student trainer at City College in the California beach town of Santa Barbara who just happened to have a boyfriend who raced bicycles. Fate stepped in when she decided to use some of her student-loan money to pay for evening classes at a local massage school. Santa Barbara was a hotbed for cycling in the mid-’80s and in no time Verses’ budding massage skills were in high demand. 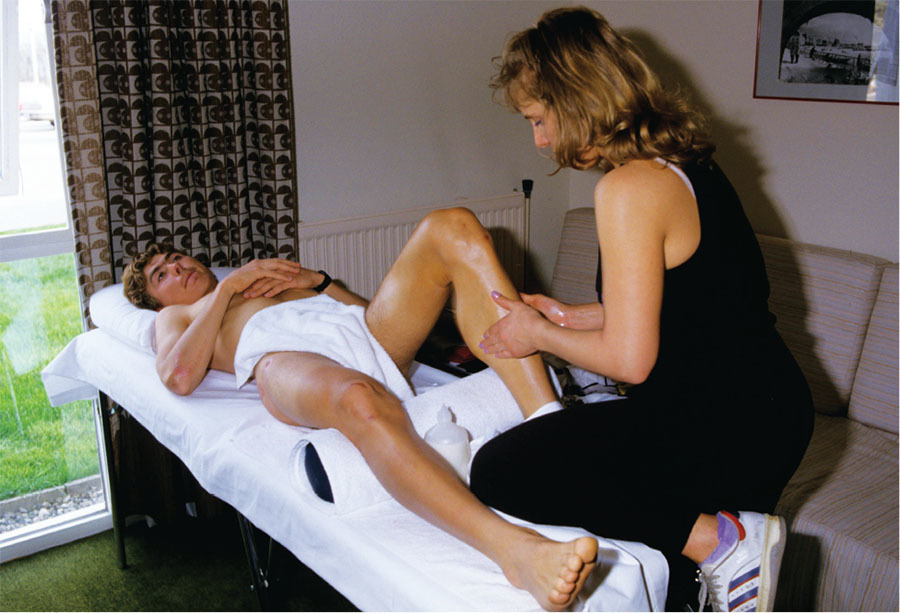 The Centurion Cycling Team began bringing her to races. The U.S. National Team coaches took notice and soon she was spending time at the Olympic Training Center. As it turned out many of the riders on the U.S. National Team turned pro with the 7-Eleven team, which also went fully pro after the 1984 Olympics, and Verses’ massage skills landed her a spot on the support staff.

The first major European race for 7-Eleven was the 1985 Giro d’Italia. If bike racing was a man’s world at that time, Italy was male-chauvinism central. “It was hysterical. It was pandemonium,” she remembers. “Mike Neel [the 7-Eleven sports director] went and got my credential. He said, ‘You are not going to get your credential.’ I said I wanted to be with the team, but he said to stay at the hotel. Then he told me he entered my name as S. Verses. He went over with my photo and wanted it laminated [on the credential]. They said, ‘This is a woman. What is she doing here?’ He made them laminate it on.

“He came back to the hotel and said, ‘You are not going to work the feed zone. You are going to work in the hotels and not be seen.’ I said, fine. It was already a free-for-all—the [soccer] World Cup was going on and they were playing a match in Verona [the Giro start town]. I can’t speak Italian. Mike Neel is trying to tell me the only two words I need to know—ciao and grazie. I asked if he could give me some other words and he says, corridore (racers) and mangiare (to eat).

“Then Mike shows up with some white lab coat for me to wear. I am not allowed to wear my regular shorts and tank top. It was one thing after another. So, 7-Eleven kind of came in with a bang and it was always a little bit different those first couple of years.”

The U.S. team performed exceptionally well on its Giro debut. Stage wins were taken by Ron Kiefel and Andy Hampsten (who finished 20th overall) and Eric Heiden won the Hot-Spot sprints competition. The obvious next step was the Tour de France…and Jim Ochowicz’s 7-Eleven squad stepped through that door the following year.

For Verses and the other team soigneurs the days never seemed to have enough hours. Besides preparing food for the riders before, during and after each stage; making as many as 30 box lunches for the team’s invited guests; schlepping the riders’ luggage; and shopping for said food, they also washed the riders’ kits. And, oh yeah, the teams didn’t have portable washing machines back then, so they used the hotel bathtubs!

On top of all these daily tasks, their most important job was giving the riders their post-stage massage, which provided both physical and mental rejuvenation. “I have had riders lock that door, walk in, get on the table and well-up with me and, barely being able to speak English, say to me, ‘Shel, my legs are falling apart.’ They are so exhausted they can’t even balance their leg up on the table without it externally rotating and flopping open.

“They have worked themselves to such a point that when I prop their knee up on the table to work their calf I have to use my hand to keep their knee up and work one-handed instead of using both my hands to alternately stroke their calf. So when someone trusts me to the point when they are that exhausted, I feel that they [really] trust me. All I can say to a domestique on that day is don’t worry. I will hold it up for you,” she says with a laugh.

In a three-week grand tour there also have to be moments of levity. “They put me in the feed zone at the 1986 Tour. I didn’t know it was going to be any different. [Swiss rider] Roberto Dill-Bundi from Malvor-Bottecchia squirts me and I didn’t know what the hell was going on. Thank God it was with water,” she says. “After that, all the boys wanted to squirt me with water. There were some real hot shots. Let’s squirt Shelley, that’s something to do. Then I started having to have a second change of clothes. They would never squirt me in the face or the eyes. They would shoot me in the stomach or my ass or the legs. It did cool me off.”

During her European career, Verses worked with some of the top teams in pro cycling, from 7-Eleven to Toshiba to TVM. What does she consider to be her most memorable moment? “Just being in the environment of these gifted athletes. That they were able to achieve peak performance. Train, race, recover. That I was part of that team of people that whether they won or lost I felt proud just being part of a team that had so many gifted people. That, win or lose, I was a spoke in an amazing wheel.”