Braving The Rugged Sabot From Issue 91; Words and Images by Bruce Hildenbrand This remote mountain pass is higher and arguably harder than the Alpe, climbing 4,300 feet in 9 miles to its summit at an elevation of 6,890 feet for an overall average grade of 9 percent. I’m pretty sure you can’t buy a jersey with the Sabot’s name plastered all over it, but maybe that’s a good thing. It’s just you and a few sluggish cows or sheep as you struggle upward on the final switchbacks, realizing when you finally get to the top that you will most likely be the only one there. And no one, including motorists, will be around for miles!

There’s a good reason the Col du Sabot has remained in obscurity. While the entire road on the south side is paved; on the north side, not so much. Actually, “not so much” is probably giving it too much credit. To be honest, there really isn’t much of a road on the north side at all. There used to be…well, okay, a trail. For many centuries the top of the Col du Sabot was the border between France and Savoy and served as a gateway between the two, complete with a customs house. In 1850, France annexed Savoy. The track on the north side looks like it hasn’t been used since. 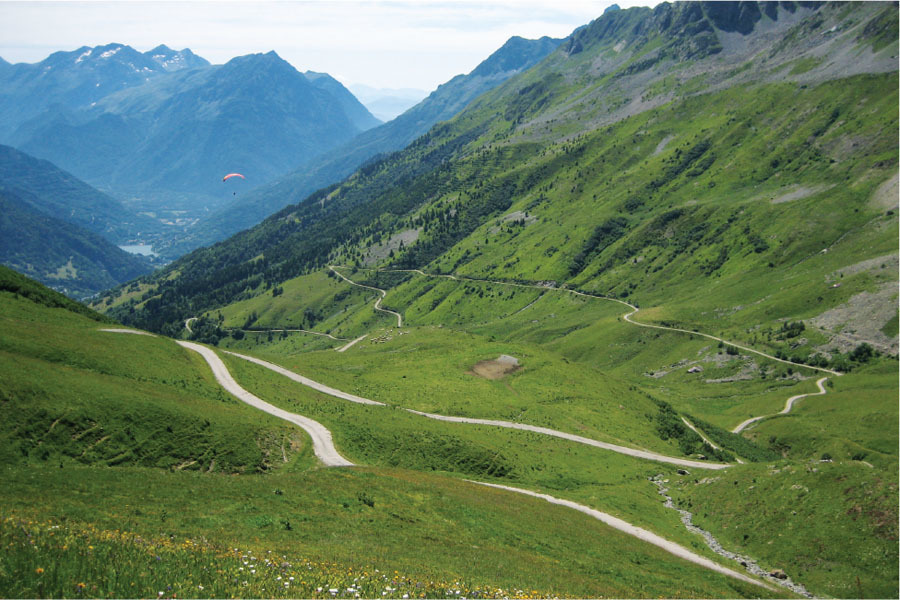 Here and there are remnants of travelers from days gone by. And, luckily, there are just enough landmarks to guide an adventurous cyclist down the north side to the Lac de Grand Maison about 3 miles away. This storage reservoir is located on the paved road up the Col du Glandon, which is actually lower than the Col du Sabot. If your climbing legs are still feeling a bit fresh you can tick it off, and the nearby Col de la Croix de Fer.

But getting there does require riding a bit of dirt, rock and grass. I guess it would make more sense to tackle the offpiste experience on a mountain bike, but do you really want to ride up the 4,300 feet south-side climb on such a heavy machine? Gravel bikes are all the rage and it might make a nice compromise, but if you are only going to take one bike with you on your trip to the French Alps it makes sense to bring your road rig. For sure, 25mm tires aren’t the optimum weapon for the Sabot’s north side, but you can do it and you will probably only have to walk a few short sections, even less if you have mad off-road skills.

To be sure, you can check off the Col du Sabot without having to hit the dirt. The south side is a memorable experience and not unlike L’Alpe d’Huez, it does have its place in professional road racing history. While Chris Froome won a stage of the Dauphiné in 2016 at the ski station of Vaujany, located about one third of the way up the climb, it was women racers who made this a staple of the Tour de France Féminin.

From 1991 to 2005, the women’s edition of the Tour had an uphill finish at Vaujany and it always proved to be decisive. In fact, one year, it proved almost too decisive. The women had climbed the Col de la Madeleine and were summiting the Col du Glandon when a fierce storm hit the peloton.

On the long descent to the bottom of the Sabot hypothermia was a real risk, and the gaps between the riders grew as the struggle went from competitive to survival. Linda Jackson, who now runs the Tibco-SVB women’s professional cycling team and finished third overall in that 1997 Tour, recalls the day: “I was having a really good race but froze up on the descent before Vaujany. I lost a few spots on the final climb. Jeannie Longo came flying by me. I told our director that after the race and he said, ‘No, Linda, you were standing still.’”

The unveiling of the 2020 Tour de France route gave a small glimpse into what might lie ahead for the Col du Sabot. Villages and ski resorts, longing for tourist dollars in the summer, snowless months have been paving dirt roads and small tracks. This explains the history behind the creation of the 2020 Tour’s most anticipated new climb, the Col de la Loze, which connects the ski resorts of Courchevel and Méribel.

Rumor has it that the north side of the Col du Sabot is slated for tarmac. It would clearly make it more accessible as a loop ride and such a long and difficult climb on the side could not be ignored by Tour de France race director Christian Prudhomme, who seems determined to find new and exciting climbs to energize interest in La Grande Boucle. The Col du Sabot clearly fits that bill. 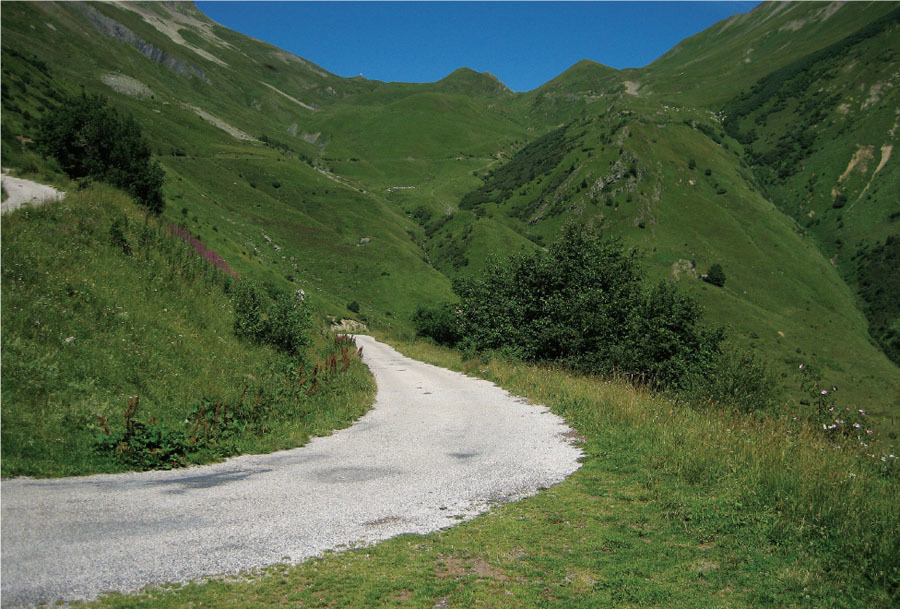 My lonely day up the south side and down the north side of the Sabot remains one of my favorite days of cycling in the Alps. I had absolutely no information about the route down toward the Grand Maison dam. But I could see the lake and the paved road on the other side and just knew that, somehow, I could make it down on my road bike. I had to walk down a couple of short, steep sections, but the riding was completely doable without much real risk of injury.

How will I feel if and when the north side gets paved? I had my memorable day and still look back on that fondly. Maybe this is a warning to those of you who would also like to experience the north side au naturel. Book that ticket and get over there. Hey, you can ride up to L’Alpe d’Huez on your rest day!