In “Otoko wa Tsurai yo” [or “It’s Tough Being a Man”], Japan’s long-running series of heartwarming comedy films, traveling salesman Tora-san visits various parts of Japan from his hometown, the low-lying Shibamata district on Tokyo’s east side. Just before Kanamachi, the next station over from Shibamata on the Keisei train line, is where you’ll find Japan’s first Bicycle Coffee store. Despite being in Tokyo proper, Kanamachi is by no means a flashy area, and might seem an odd location for such an innovative business.

The Bicycle Coffee Company began as a roastery in Oakland, California, in 2009. Its niche is locally roasted coffee delivered by bicycle. The company responsible for Bicycle Coffee’s presence in Japan is Sun West, which has similarly assisted Arc’teryx outdoor equipment and Chrome bicycle messenger bags. When Mission Workshop, another messenger bag maker that’s an offshoot of Chrome, had a pop-up store in Japan in 2012, it came along with staff from Bicycle Coffee. That was the beginning of a relationship with Sun West and the first steps into the Japanese market, which is still Bicycle Coffee’s first market outside the U.S.

In Japan, as in America, the company’s core business is delivering roasted coffee by bicycle. Sometimes its workers will bike over 30 kilometers to Kichijōji, which is known for its coffee houses. It would be a shame not to.

Supplying the coffee beans is overseen by the Oakland shop. This is Direct Trade coffee, purchased directly from plantations in Guatemala and Ethiopia, and then forwarded to Japan. Bicycle Coffee doesn’t own plantations, but complies with Fair Trade principles by agreeing to multiyear contracts at fixed prices.

“With coffee beans, as with any crop, there are good years and not-so-good years,” says Yusaku Narita of Bicycle Coffee. “If we only bought during the good years, that might allow a better taste, but we’d be sacrificing continuity. We don’t mind seasonal variations, even from the same plantations.”

The company offers only four varieties: medium roast, dark roast, blend and decaf—the same as in the U.S. There are no special blends made just for Japan, where consumers well versed in the distinctive tastes of specialty coffees are rare. At any rate, Bicycle Coffee isn’t altering its approach to cater to the Japanese palate, even offering medium roast as the lightest roast option. Its forte is a refreshing taste that brings out the distinctive fruity flavor of the coffee beans, which are, after all, the seeds of berries.

In sync with the U.S. approach from the outset, the Japanese operation strives to emulate each step in careful detail. One issue that arose was the packaging.

“Coffee bags are typically lined with plastic or aluminum,” says Narita. “The packaging in Oakland is made of biodegradable plastic, but it’s not available in Japan. So we had to import it from America. We really want to use things that are made in Japan, but we don’t want to use anything that’ll have a detrimental effect on the environment.” The company uses this packaging in place of pottery for growing herbs and other plants in front of the shop. And the use of packaging that eventually returns to the earth emphasizes Bicycle Coffee’s eco-consciousness.

Interestingly, every Friday, the store gives out free cups of coffee to anyone interested. These Free Coffee Fridays also began in Oakland. People only interested in making money might scoff at this practice. So what sort of effect does it have? 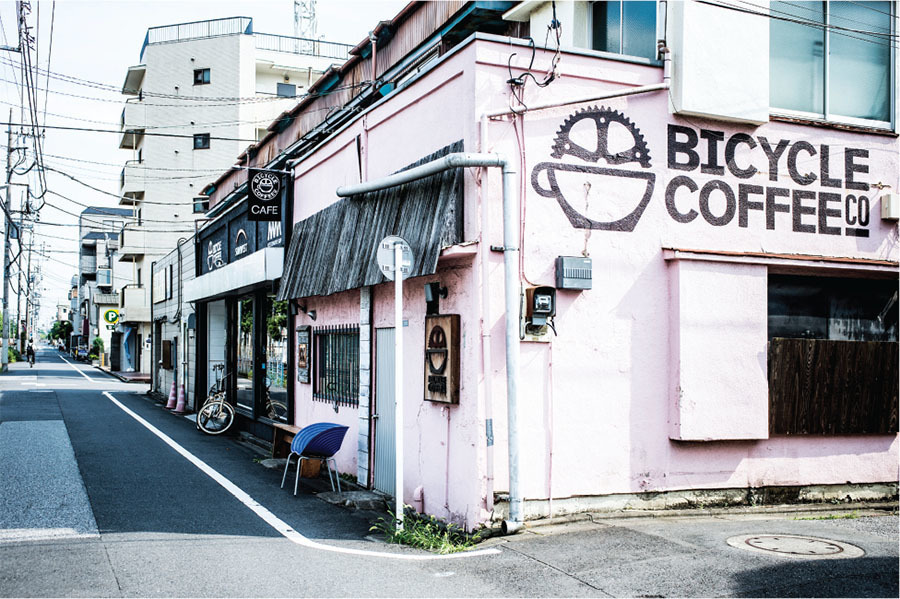 Narita explains, “Many of the people who live nearby are very aware of the local area. In Oakland, too, a lot of the people coming for the coffee are from the neighborhood. Some are college students, some are older people. We hope this will become a place for locals to meet up and communicate.” An off-the-beaten-path area like the Shibamata district is surely more amenable to that goal than a shopping center. As the saying goes: “Think globally, act locally.” It’s a mind-set easily obtained with coffee…and bicycles.

From issue 81, get Peloton back issues here.