Better Than a Bidon From Issue 92 • Words by Paul Maunder; Images Courtesy of Brewery of Saint-Sixtus Abbey Ghent—Wevelgem is a race of two halves. The second half, which we’re all familiar with from the television coverage, is defined by the double climb of the Kemmelberg and, more recently, the three gravel Plugstreets. The first half is very different. Traditionally, the peloton rolled along coastal roads to Veurne then turned south to head inland toward the climbs on the French border—though the parcours has changed this year, looping east, then northwest from the new start in Ypres. Though it’s early in the race, these kilometers are flat and exposed and the wind can break up the race into echelons. Anyone not paying attention can get caught in a rear group and effectively eliminated from the race.

However, apart from incurring the wrath of your directeur sportif, pulling out of the race at the feed zone near Poperinge needn’t be such a disaster. Simply pull off the course, reset your GPS and head east-northeast. You might miss the feed, but your destination promises something far better than isotonic drink and rice cakes. On tiny back roads through verdant farmland, and before reaching the village of Westvleteren, you’ll come to the Saint-Sixtus Abbey. 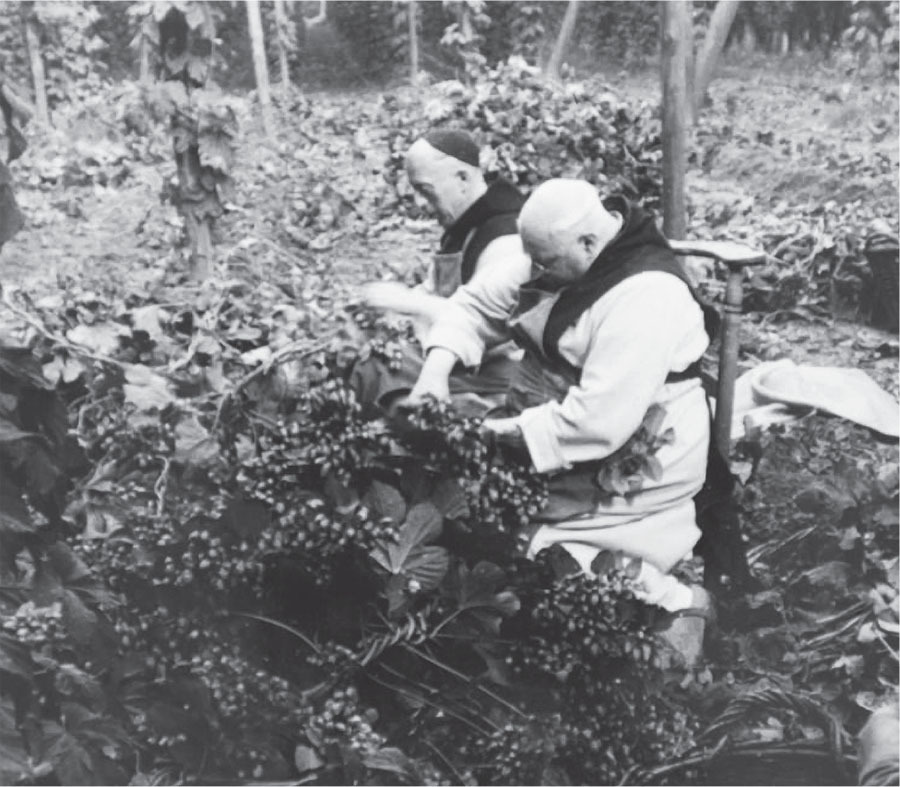 Here, 19 monks of the Cistercian order brew a beer that has regularly been named the best in the world. There are three varieties on offer: the Blond, Westvleteren 8 and Westvleteren 12. This last is the strongest, at an eye-watering 10.2 percent alcohol by volume. It is sometimes referred to as the Flemish Burgundy. To quote from the monks’ website: “The exquisite smooth taste of caramel and chocolate goes perfectly well with the sweet raisin and nutty notes in the aroma. Together with the firm alcohol percentage, it results in a pleasant full-bodied, long-lasting and warm aftertaste.” Five thousand barrels are brewed annually, and such is the demand that the monks have had to implement a strict digital ordering system to avoid unscrupulous buyers selling on their bottles at inflated prices—though one suspects if Wout Van Aert turned up at the abbey gates they may make an exception.

Beer has become one of the cornerstones of Belgian identity. From the exclusive dark amber of Westvleteren to the mass-produced wheat beers found in supermarkets around the world, “Belgian” has become a badge of quality. Its beer is a successful export and a tourist attraction, but it is also deeply embedded into the country’s culture and history.

Beer production in Belgium can be traced back to the ninth century, when Charlemagne, King of the Franks and Emperor of Western Europe, ordered the Belgian abbeys to build breweries with the aim of economic self-sufficiency. In the 12th century, the antiseptic qualities of beer became better understood at a time when drinking water was foul and beer was the healthy option. The monks were fortunate that drinking a pint or two of 10-percent beer didn’t constitute breaking their fasting periods—though drinking on an empty stomach must have made for some rather giddy holy men.

Throughout Europe most monasteries followed the rules set by Saint Benedict, one of which was that monasteries should be places where a traveller might stop for rest and refreshment. In Flanders, this translated into a reviving beer. Eventually the wise monks set up small pubs in their monasteries to turn this practice into a revenue stream. In 2020, the same commerce still takes place—only now via the internet.

As centers of scientific research (you might argue beer is both art and science in Belgium), the monasteries were able to experiment with different methods and ingredients. Until the 14th century, all Belgian beer was based on gruit, a secret herbal mixture. The abbeys, however, switched to hops to better preserve the beers. Those brewers that stayed with gruit used acidifying processes to preserve their products, creating the first red-brown beers. Belgian beer was characterized at this time by the diversity of cereals used, including wheat, barley and oats.

In the 16th and 17th centuries, while successive emperors brought in regulations to improve beer quality, the diversity of Flemish brewing flourished. Regional beers were created, such as the Antwerp barley beer, the Leuven white beer, the Oudenaarde brown beer and the cellared beers of Lier. In 1783, Emperor Joseph II dissolved many of the abbey breweries and brewing became a more commercial affair. The French Revolution, then the advent of the more refreshing Czech pilsner, took their toll on Belgian brewing as a major industry, but small local producers always continued their passionate work. Even in small villages the traveller might find several breweries, and this intense local competition meant that quality and innovation remained paramount. Belgian society is characterized by a spirit of localism—each village believes itself independent and different from its neighbors—and breweries are an emblem of every village’s identity. Very often, during the 19th century, the village mayor was also one of its brewers.

In World War I, German troops seized the copper vats of half of the 3,200 breweries in operation at the time. Of those that survived, more were forced out of business by the economic crash of the 1930s and the shock of World War II. By the time Belgium emerged into the postwar years its brewing industry was in a sorry state.

Enter Michael Jackson. No, not that one. This Michael Jackson was from Yorkshire, England, and an influential writer about beer and whisky. In 1977, he published “The World Guide to Beer,” a book that was translated into a dozen languages and established Jackson’s position as an expert on the subject. He travelled extensively in Belgium and loved Belgian beers. Through his books, newspaper articles and a television show, he almost singlehandedly pulled Belgian artisan brewing out of the doldrums. In 1997, he was appointed an honorary officer of the Ridderschap van de Roerstok der Brouwers, the elite association of Belgian brewers, an award usually only given to celebrated brewers.

After that recognition of and interest in Belgian beer, it experienced a resurgence. Large breweries found healthy export markets and local microbreweries opened, creating a healthy ecosystem. In the last two decades there has been strong growth in the smaller breweries, those that offer something different, whether it is brown beer, blond, wheat or lambic beers (a traditional Brussels style). The varieties are endless, and the diversity of Belgian beer culture is so strong that it received a UNESCO Intangible Cultural Heritage award in 2016.

So, how to drink it?

Well, first, it is important to have the right glass. Any credible Belgian brew has its own glass and to mix them up is a rookie error. The glassware is as diverse as the beer, but there are roughly three types: the tulip-shaped glass which trap a beer’s aroma, flute-shaped glasses that display the vivid colors of fruit beers and the heavy goblets favored by Trappist breweries. This last variety helps drinkers to imagine they are a traveller in the Middle Ages. And being much thicker than other glasses, goblets are less likely to break when dropped by a light-headed monk!

Second, beer can be paired with gastronomy in the same way as wine. Many restaurants in Belgium will provide a beer to match each course of your dinner. For example, a citrusy blond beer can complement white meat. A dry beer goes well with oily fish. And a traditional brown Flemish beer should be drunk alongside a rich red meat dish. There are beers to go with your cheese, even beers to go with your Belgian chocolate dessert. The good news is that beer-and-food pairing is a relatively new art form and much more relaxed than that of wine. Ask the experts, try things out; enjoy yourself.

Finally there is always the simplest option of all—stand in a muddy field, swig from a bottle of Westvleteren and shout at Peter Sagan as he attempts to win another edition of Ghent–Wevelgem. Unbeatable.