The mountainous American West allows riders to dream of the legendary cols or passos of faraway Grand Tour routes that wind through the Alps and Pyrenees. Be it the Rockies, the Cascades or the Sierra Nevada, the mountain ranges of the western U.S. offer a real sense of both challenge and grandeur to those looking to test their climbing chops. The long, sustained and scenic climbs such as Boulder’s Flagstaff, Southern California’s Mount Baldy or Tucson’s Mount Lemmon Highway allow us to appreciate the suffering and perhaps dream a little bit about the Passo di Gavia or the Col d’Aubisque.

But for those who dream of the Ardennes?

If there’s a passable American facsimile of Belgium, it can be found in the American “Rust Belt.” The idealized concept of the Flandrian is someone who is tough, hardworking, and no-nonsense. This is the ethos found along the hilly streets of Pittsburgh. The blue-collar roots of this former steel town remain firmly intact in a city that has turned its fortune on tech and the strength of strong neighborhood fabric that harkens to older times. The Steel City has sat atop Forbes’ “Most Livable City” list more than any other in America. Pittsburgh was largely settled by Irish, Italian and Polish immigrants, and many of these ethnic neighborhoods boundaries remain fairly intact today. Pittsburgh walks a balance between broad shouldered toughness and a straightforward genuine sincerity that is, at its core, warm and welcoming. Pittsburgh can feel like home, even if you didn’t grow up here. For cycling’s pavé enthusiasts, Pittsburgh might be a hidden American utopia.

The romance of cobbles ends pretty quickly when you actually have to ride them. Their speed-sapping and bone rattling nature is at once invigorating and simultaneously alarming. Doubt creeps in that you can—or should—should be pedaling a bicycle across such a seemingly unstable and hostile surface. You wonder if the bicycle will survive intact, let alone the rider. When it comes to cobbles, the Band-Aid approach seems most sensible: hard and fast, grit your teeth and get through them quickly.

The use of cobblestone pavers in Pittsburgh dates to around the 1840s, when the booming industrial city began experimenting with paving its many dirt and mud covered roads. An initial foray into wooden cobbles went awry when streets flooded and the wooden blocks swelled and burst. The city then turned to cobblestones, and many of the city’s hilly streets remain that way today.

Pittsburgh’s neighborhood streets are loaded with opportunities to satisfy your love of cobbles. Is it true love, or just a passing fancy? Joncaire Street, in the city’s Oakland neighborhood, is a short, punchy ramp 300 meters in length with an average gradient of 7%. It’s a good toe dip for some of the city’s more intimidating cobbled climbs. A nearly flat beginning gets serious about half way through as the ramp steepens to about 10% with a grade of 12% to finish. Lungs, legs, as well as your buzzing hands, will be asking for a reprieve by the time you top out. Murray Hill Avenue in nearby Squirrel Hill offers 500 meters of cobbled climbing with grades that undulate between 7 and 12 percent. It feels much more like 1,000 meters, with each uptick of the stone road sapping your momentum as well as your leg strength. You come to the top nearly at a standstill. 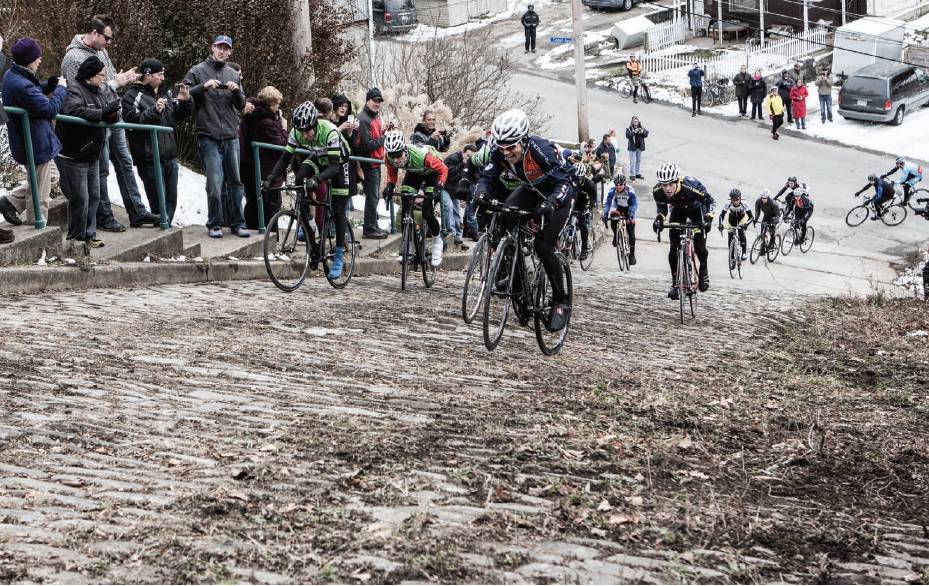 In addition to the cobblestones, Pittsburgh has some of the world’s steepest hills. Each year, the day after Thanksgiving, Pittsburgh’s braver cyclists tackle the Dirty Dozen, a ride that features the city’s twelve steepest climbs. Its organizer and native son Danny Chew is a two-time Race Across America winner. Chew has seen the ride go from himself and a couple friends to about three hundred participants. The ride is non-sanctioned and is largely a recreational ride for those looking to burn off turkey; for a very select few, it’s styled as a race. Riders make a neutral approach to each of the twelve climbs until Chew blows a whistle, then those in contention power to the top to accumulate points. Points are awarded five deep per climb for an overall sort of GC victory. Mountain biking pro and Cat 1 road racer Stephen Cummings has won the race for the past ten years, despite saying each year is his last.

Cummings grew up here and thinks that the hills are a part of the fabric of both the racing scene and the people. “I was born in Carrick, on a street where my parents had to park their Pacer at the bottom because the car couldn’t make it up. It’s not even a known hill. There wasn’t a sidewalk, there were stairs. This is just normal in Pittsburgh. There’s a heartiness to people here.” Pittsburgh breeds strong climbers among its cycling set. “The hills dictate rider position, we rode with a guy from the Midwest once who couldn’t believe how not-aero we were. It doesn’t matter so much when a super fast group ride averages 14 miles per hour. Cat 1 racers here typically have a compact setup with a 27 in the rear.”

Among the Dirty Dozen’s climbs are two of the city’s toughest cobbled streets. “The climb up Hazelton, Burgess and Suffolk streets (Dirty Dozen climb number 7) is brutal. The first few minutes are 20% and you can’t see the top at the start, and when you turn left onto Suffolk Street it’s big Belgian cobbles and it’s probably twenty-something percent there, too.”

The ninth climb of the Dirty Dozen is easily its most famous. Canton Avenue, in the city’s Beechview neighborhood, is the world’s steepest paved public road, if you can call its gnarled cobblestones pavement. At 37%, the term “wall” is more apt. (The folks at Guinness World Records have awarded the World’s Steepest Road distinction to New Zealand’s Baldwin Street (35% at it’s steepest), perhaps because it’s considerably longer at over two miles, compared to the just 200 meters for Canton Avenue.) “There are only really one or two lines that a road bike can get up. There are places where grass and moss are growing through and a lot of the cobbles have rotated,” notes Cummings. The spectacle provided by Canton draws a crowd each year for the Dirty Dozen. Once the racing set makes it to the top, the real show begins. Many riders don’t make it to the top, as some come to a dead stand still and then gravity takes over. 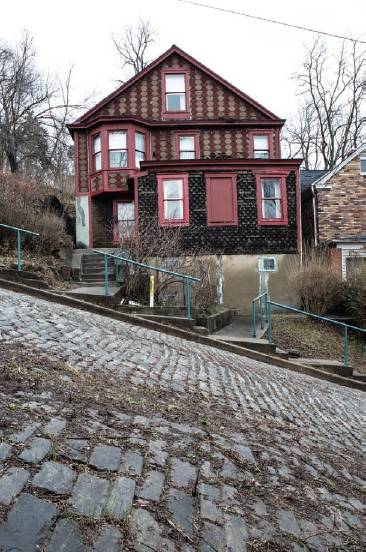 What it lacks for the cycling history and cache (and perhaps the frites of Flanders), Pittsburgh makes up for with its own unique brand of culture and identity. Though typically not a cycling destination, the city did formerly host one of the three races that comprised the Tour of America, the Thrift Drug Classic. For those with designs on riding Belgian cobbles, Pittsburgh offers a domestic alternative that couples tough cobblestone roads with a near impossible steepness. After all, the steepest parts of the Koppenberg, the most feared climb in the Ardennes, are only 22%. p 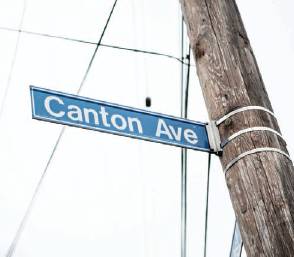 This article originally appeared in issue 29.