Alentejo: Beyond Ordinary From Issue 91 • Words and Images by Clive Pursehouse PORTUGAL can be a simple pleasure or a complex conundrum. The streets of Lisbon bustle with joy, color and music. A café in ancient Estremoz explodes with bouts of laughter and conversation. But the Portuguese would have us believe they are a melancholy people if you give credence to the sad longing and beautiful sounds of Lisbon’s fado music, or their notion of saudade, a uniquely Portuguese word for longing, melancholy and sadness. Spend any time in Portugal and you have to wonder if all of this sadness business isn’t just a ruse.

After a handful of very hot days in Évora, some merciful cloud cover and a strong wind gusting to the northeast sees me rolling out to explore some of Alentejo’s back roads. Alentejo translates in Portuguese to “Beyond the Tejo River.” The region and its walled medieval capital Évora have watched Portuguese history since the second century B.C. I pick my way through the cobbled streets of Évora’s old town, crossing the main square, the Praça do Giraldo, where the city’s 12th century cathedral is flanked by an ancient temple, one of the city’s original Roman ruins. 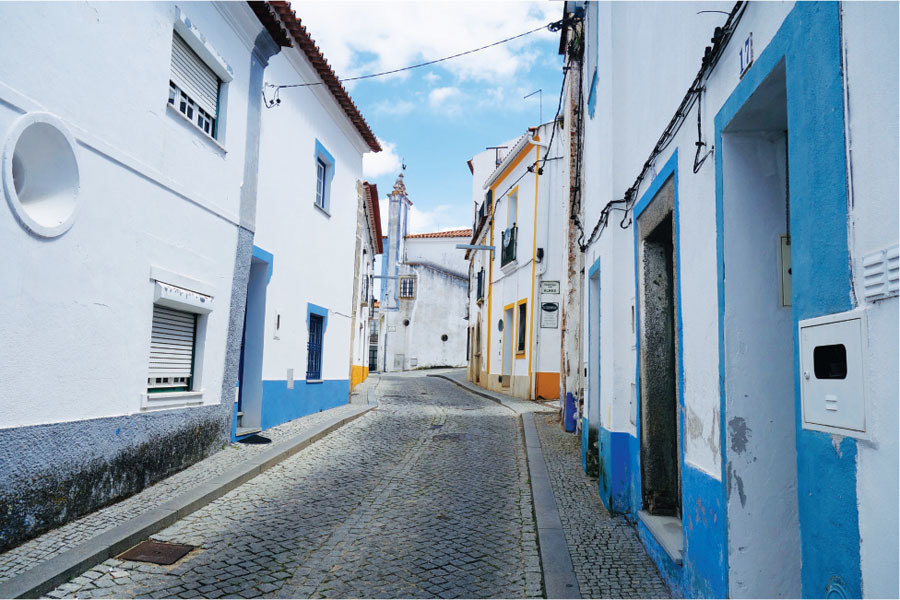 The road out of town takes me through what feels like a residential neighborhood that could be anywhere in the world. Then I zig and zag through farmland until the road reaches into vast, open fields. I pedal a long straightaway with picture-postcard views in every direction. If there’s a landscape image of Alentejo it is the quercus suber, the cork oak, standing alone in the undulating brown wheat fields of this part of Portugal’s “breadbasket.” As the road rises on the way toward Igrejinha I pedal between stands of cork oak, dotted with large white steer lounging in the shade. The suber oaks are beautiful trees from a distance, but they are bizarre looking close up.

These trees stand denuded, their bark peeled from the top of the trunk to the ground. They are marked in white paint with a number: sixes, eights, fours and threes painted against varying deep-red trunks. This is a unique element of Alentejo’s bounty, representing the world’s largest source of corks, used as stoppers most notably in wine. The first harvest happens when the tree is about 25 years in age. Then, only every nine years or so, the cork is peeled again, always by hand. Once a tree’s bark is peeled, a single digit, the last of the year when it was harvested is painted in white on its trunk.

If Alentejo has an equivalent elsewhere in the world, it’s Italy’s Tuscany. The hearty, rustic cuisine and the quiet bucolic country roads make this place a cyclist’s dream. The other common thread is the wine. Though Tuscany’s wines are all derived from one red grape, the wines made here in Alentejo count their origins from a number of indigenous varieties, both white and red. Alentejo has a winemaking history that predates the region’s Roman occupation, and evidence suggests that during that time, the Alentejo wines were sent back to the homeland for their consumption.

In the small town of Reguengos de Monsaraz, just a few kilometers from the Spanish border, sits the Adega José de Sousa winery. Here, modernity and tradition come together in the production of some of Portugal’s most highly regarded wines. As with other contemporary winemakers in Alentejo, the wine is fermented using a clay amphora, called a talha, in a technique that’s been in use since Roman times.

These so-called talha wines have become trendy, particularly those from the former Soviet republic of Georgia. While perhaps lesser known, the wines made in this part of Portugal follow the same principles—the grapes are crushed and then loaded into the 6-foot-tall clay vessels, where they ferment. 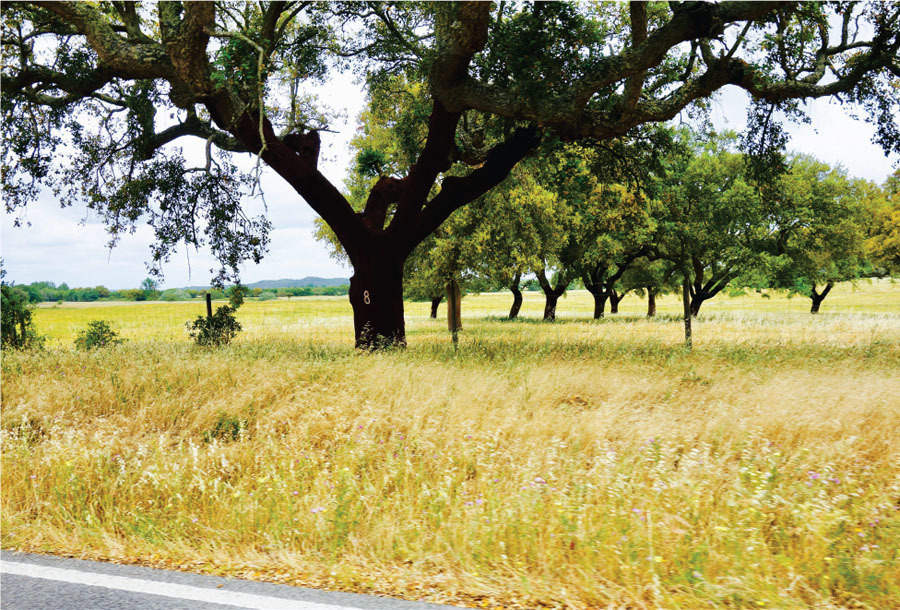 At Adega José de Sousa I’m standing at the epicenter of this tradition. There are 114 talhas in one room, many of them dating from the late 19th century. Sometimes, during fermentation, an amphora can explode without warning. But these unique wines are loaded with texture and character that you don’t get from conventional modern winemaking.

Back on my bike, I coast through Igrejinha hoping to find an open market or even a gas station, having left Évora without as much as a water bottle. The air is still cool but I’m on a 100-kilometer route that I’ve never ridden before and it seems ill advised to ride much farther without hydration. I double back down a dead-end road and nothing seems open, so I press on.

Through more stands of cork, some climbing leaves me at what appears to be an abandoned railroad station with the word Azaruja tiled on the side. The grass between the tracks is as high as my knees and there doesn’t appear to be another soul around for miles. To be exact, it’s 4 kilometers to an actual town, the aforementioned Azaruja. Passing a couple of cork-processing facilities I head for the center of town hell bent to find myself some water, maybe a Coke, and whatever will pass for a Snickers bar.

There is a green awning embossed with the word “minimercado” and though the lights are off, the shop is open. I purchase two apples, a banana, some water and a Coke. Outside, I guzzle the Coke, inhale one of the apples and take in my surroundings. Across the street, draped in gaudy banner ads, is a squat, round building, which I discover is the Praça de Touros de Azaruja. It was the first and most renowned of Portuguese bullrings, built in 1860. It’s rumored to have been the model used for Lisbon’s Praça de Touros do Campo Pequeno, one of the grandest bullrings ever built. Azaruja’s groundbreaking bullring has since fallen into disrepair and for a time was used to process cork. Today, it sits completely abandoned. And it’s for sale, if you are interested.

Leaving Azaruja, I pass quickly through Vale do Pereiro, turning left and climbing through cork forests. Wheat fields and fluffy clouds eventually give way to blue skies over vineyard rows. The long history of winegrowing in Alentejo has seen plenty of fits and starts, from Moorish occupation through internal political manipulation and the phylloxera blight—but these days it is becoming grounded as a wine destination and an important part of the preservation of Portuguese culture. 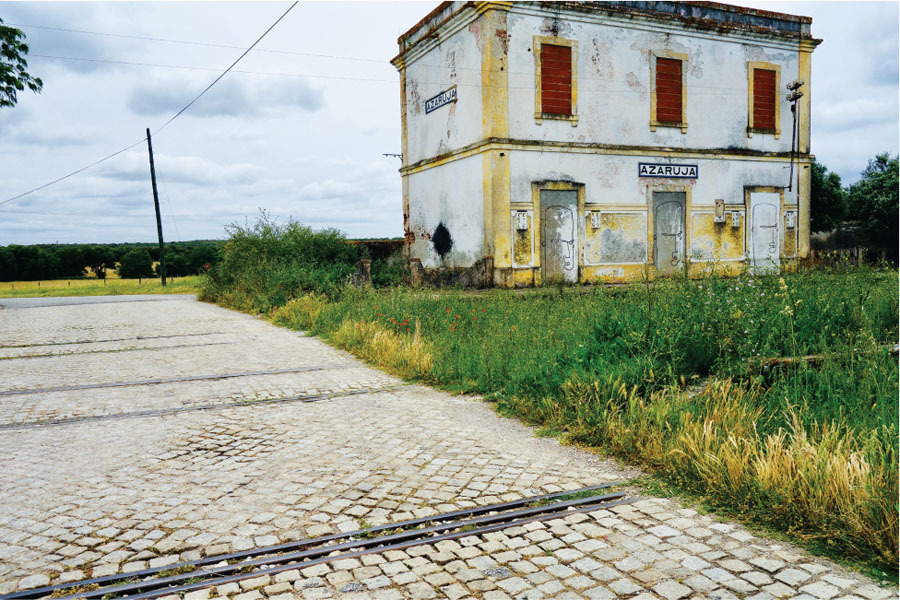 Like the Douro and Vinho Verde, the wines of Alentejo are made most notably from native varieties that you’ve likely never heard of. There are red wines made from Alicante Bouschet and white wines from Antão Vaz, a variety with enough structure and depth to pass for a white Burgundy in a blind tasting. The wines made here offer something for everyone, the best of tradition and modernity and a young generation tremendously proud of and committed to remaking the region’s wine reputation.

On a steep climb toward Arraiolos the town’s 13th century castle looms large. Alentejo is dotted with fortresses, some dating to the ninth century, built to withstand a conquest from Spain, or beyond. This eastern frontier protects the capital and its valuable seaports, just a 90-minute drive away. A roundabout swings me past the castle’s visitor center into the town. Arraiolos is wildly charming, even with a little road construction, with its ancient buildings dressed in the signature white-and-blue paint scheme of the region. Cobblestones and flowering trees in the main square along with the town’s reputation as a classical rug-making town make it one Alentejo’s cultural must-sees. The narrow streets provide some shade and a reprieve from the afternoon’s rising temperatures, my last stop before I ride on.

Back in Évora, I end a beautiful day of riding in the countryside with a glass of the ubiquitous Portuguese beer, Superbock. Later, I ramble around the stone streets looking for Botequim da Mouraria, the first words out of any local’s lips for dinner in town. There’s a line already formed before the restaurant opens, but fortunately I’m seventh in line; there are nine seats total. I place my order, lots of local pork, and the owner says “fantastic” before taking back the menu, one of two copies in the whole place, and passing it to the next guest. I drink a few glasses of Mouchão, one of the region’s flagship wines, paired with the most tender pork steak the size of my head.

Alentejo sort of sneaks up on you, especially if you don’t bring expectations to the experience. My mood builds to a crescendo of authenticity and honesty, and then it leaves me wondering if I should even catch the flight home. The people, their warmth and the phenomenal food and wine they create is a tangible extension of their love for this place. Andy Levine of Duvine cycling tours and his local guru João Picado offer tours of Alentejo, and they helped me with my route selection. João speaks of his native Alentejo with an appreciation that I now have some small notion of—it’s a feeling of discovery, a privileged sense of having seen something special and an eagerness to tell the world about it.

A blend of three different grapes, Grand Bouschet, Trincadeira and Aragoneês, this wine is made with a combination of ancient talha techniques along with the use of stainless steel and oak barrels. Texture, depth, savory herbal notes and lots of black fruit and tobacco, this is a tremendous wine with a low alcohol percentage that will get your attention and a price tag you’ll love. $18

If there is a cult wine in Alentejo, it’s Mouchão. Tucked into a massive grove of chestnuts at the end of a dusty road, the winemakers at Mouchão are making the case for wines made from Alicante Bouschet to have a place among the world’s finest. Sappy fruit, floral notes, turned earth and extraordinary elegance. The Mouchão and the wines from Alicante Bouschet can lay down a long while; Mouchão recommends 10 years or so, minimum. $65

Made in the full talha tradition at the ultra-modern Herdade do Rocim estate, this wine is a blend of several indigenous grapes, including the star of Alentejo, and Antão Vaz, along with Perrum, Rabo de Ovelha and Mateúdo. A nod to tradition and natural winemaking, this white blend is all in, no temperature control, natural yeasts and some oxidation. This is a wild wine that gives us a sense of what went down in the region’s wineries some 2,000 years ago. Aromas of wild flowers, beeswax and a waxy, nutty flavor profile with hints of cardamom and pear. This is history in a glass, an opportunity to appreciate a place and time for a wildly approachable price point. $18

A conventional reflection of the region’s native white grapes, this blend uses stainless steel fermentation to highlight the bright fruit character and vivid acidity of native varieties like Antão Vaz, Roupeiro and Tamarez, among others. Aromas of citrus, peach skin and wet stone open for a flavor palate of energetic key lime, and ripe pineapple flavors, the acidity zips and zings into the finish. A fresh take on Alentejo’s signature white grapes. $22